Despite the drop in commercial building plans in August, five notable commercial projects valued at $100 million or more entered planning in August 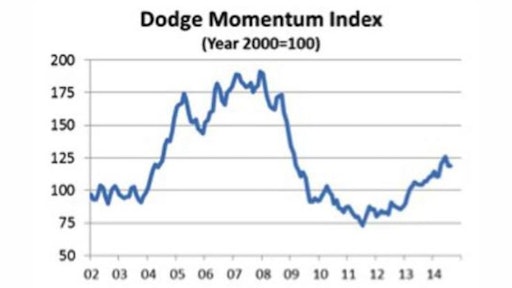 The Dodge Momentum Index made a small gain in August, increasing to 118.8 for the month, up 0.2% from the July reading.

The Dodge Momentum Index made a small gain in August, increasing to 118.8 (2000=100) for the month, up 0.2 percent from the July reading. The improvement in August is on the heels of a 5.7 percent decline in July, according to McGraw Hill Construction, a division of McGraw Hill Financial. The Momentum Index is a monthly measure of the first (or initial) report for nonresidential building projects in planning, which have been shown to lead construction spending for nonresidential buildings by a full year. The Momentum Index is now 13.9 percent higher than one year ago, and continues to point to recovery in the sector.

The August rise in the Momentum Index was supported by a 5 percent increase in institutional building plans, while a 3 percent drop in commercial plans restrained further growth.  Despite the drop in commercial building plans in August, five notable commercial projects valued at $100 million or more entered planning in the month. These include the $200 million DaniaLive Marketplace in Dania Beach, Fla., a $184 million office complex in New York, the $175 million North First Office complex in San Jose, Calif., the $110 million Champions Petfood warehouse in Auburn, Ky., and a $100 million mixed use development in College Station, Texas.