Construction materials prices were unchanged in August but are 1.7 percent higher than this time last year 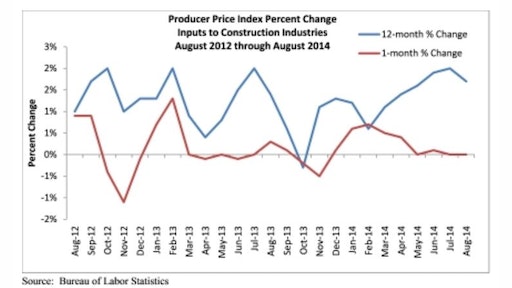 "In general, nonresidential construction remains stable, despite the recent uptick in demand for inputs in North America," said Associated Builders and Contractors Chief Economist Anirban Basu. "There are a number of factors at work, including an unexpectedly weak European economy and a surprisingly strong U.S. dollar. While the Euro has been falling in value, the dollar has been rising throughout much of the year against other major currencies including the Japanese Yen and British Pound. One implication of this has been an increase in the purchasing power of the dollar, which suppresses input price increases."

Crude energy materials prices fell 4.9 percent in August and are 6 percent lower than one year ago. Natural gas prices fell by 12.6 percent in August and have now fallen in five of the past six months; however, on a year-over year basis, natural gas prices have expanded for 21 consecutive months. Overall, the nation's final demand prices, as measured by the PPI, remained flat in August but are up 2.2 percent year over year.

"Considering that this summer has been as mild as the winter was harsh, it's not the slightest bit surprising that energy prices have dropped in recent months," said Basu. "In fact, 80 percent of the decline in overall goods prices, which were down 0.3 percent in August, is attributable to falling energy prices."

Three of the 11 key construction inputs did not experience price increases for the month.