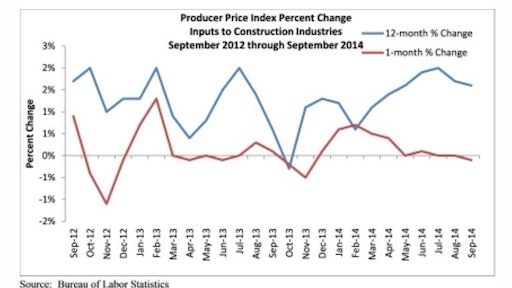 Construction materials prices inched down 0.1 in September, but rose 1.6 percent compared to the same time last year, according to the U.S. Department of Labor's October 15 Producer Price Index. Prices for inputs to construction industries have remained unchanged from June to August—the longest such period since the price index for construction inputs began in 1986. Inputs to nonresidential construction fell 0.2 percent for the month but were 1 percent higher than in September 2013.

"The decline in oil prices has been simply stunning and is largely in response to growing evidence of weakness in Europe," said Associated Builders and Contractors Chief Economist Anirban Basu. "Forecasts of European economic performance are seemingly being downgraded on a daily basis, including forecasts of Germany's economy, which heretofore has been a reasonably strong performer."

"Without the decline in oil prices, which could fall even further looking ahead, materials prices in the aggregate would not have decreased in September," said Basu. "In fact, a number of materials prices actually rose during the month, including iron and steel (0.5 percent) and softwood lumber (2.7 percent). Stakeholders also should note that the U.S. dollar has been rising for much of 2014, which has a tendency to suppress materials price increases."

Four of the 11 key construction inputs did not experience price increases for the month.