Nonresidential construction added 3,200 jobs in September while the construction industry as a whole added 16,000 jobs 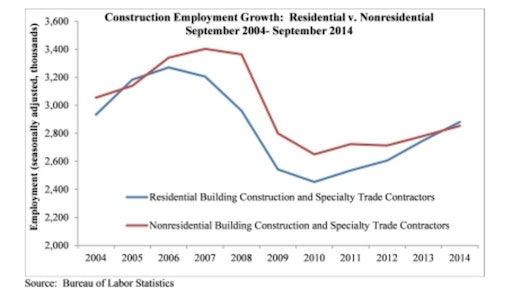 The national construction unemployment rate fell to 7% on a non-seasonally adjusted basis in September, its lowest level since November 2007.

"After a disappointing August jobs report, today's data reaffirms the ongoing momentum in the broader national economy," said Associated Builders and Contractors Chief Economist Anirban Basu. "Today's release also confirms that nonresidential construction's expansion continues to be a moderate one, with the industry adding only a few thousand jobs in September. Much of the momentum in construction continues to be in multifamily residential development."

The national construction unemployment rate fell to 7 percent on a non-seasonally adjusted basis in September, its lowest level since November 2007. "Though today's report mostly provided good news, there are some red flags that nonresidential construction industry leaders should consider, the most important of which is the decline in the overall unemployment rate," said Basu. "Most people will cheer the unemployment rate decline for good reason. However, lower unemployment could make it more difficult for employers to secure skilled labor and could lead to an increase in interest rates next year."

According to the Bureau of Labor Statistics' household survey, the national unemployment rate fell to 5.9 percent in September. This small change is at least partially explained by a decline in the labor force, which shrank by 97,000 workers in September. The labor force participation rate continued to slide, inching down to 62.7 percent.