Confidence in the Equipment Finance Industry Remains Steady in December 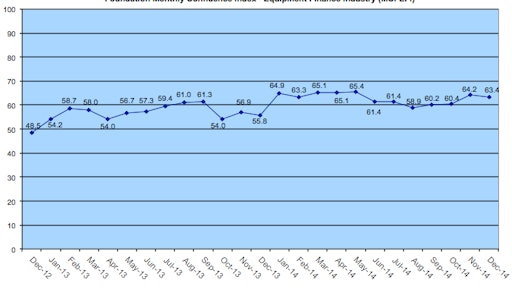 The December Monthly Confidence Index decrease slightly from 64.2 in November to 63.4 in December, indicating that confidence in the industry remains steady.

The Equipment Leasing & Finance Foundation (the Foundation) released the December 2014 Monthly Confidence Index for the Equipment Finance Industry (MCI-EFI), which showed confidence in the equipment finance market is 63.4, steady with the November index of 64.2.

When asked about the outlook for the future, MCI-EFI survey respondent David Schaefer, CEO, Mintaka Financial, LLC, said, “We are very pleased with our year-over-year growth in application volume, originations, approval rates and access to capital. We think next year will be positive again but expect to see slight increases in delinquency and credit losses.  We have seen extraordinary portfolio performance the past three years, but we're planning for a more normal period in 2015.”