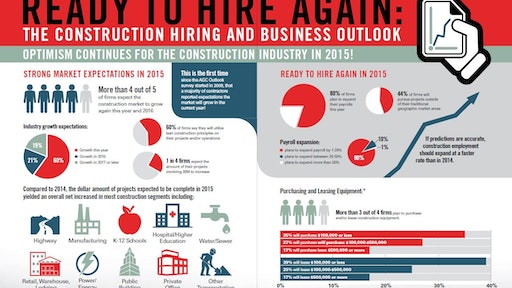 Eighty percent of firms responding to a recent survey say they plan to add employees in 2015 - significantly higher than the 57% of firms that reported adding to total headcount in 2014.

Eighty percent of construction firms plan to expand their payrolls in 2015 while only 7 percent expect to reduce headcounts according to survey results released today by the Associated General Contractors of America. The survey, conducted as part of Ready to Hire Again: The 2015 Construction Industry Hiring and Business Outlook, indicates that most contractors are optimistic about the year ahead and ready to expand but will have to cope with challenges including worker shortages and regulatory burdens.

"Contractors are extremely optimistic about the outlook for 2015," said Stephen E. Sandherr, the association's chief executive officer. "Indeed, if their predictions prove true, industry employment could expand this year by the most in a decade."

Sandherr noted that the number of firms planning to add employees — 80 percent — in 2015, is significantly higher than in 2014, when only 57 percent of firms report they added to their total headcount. However, many firms that plan to hire this year expect to make only modest increases, with 90 percent of the firms that expect to add employees reporting they will expand by one-quarter or less this year.

Growing demand for private-sector construction should drive growth in 2015, association officials noted. Contractors are most optimistic about the retail/warehouse/lodging segment, with the difference between optimists and pessimists — the net positive reading — at 33 percent. Contractors are also optimistic about the manufacturing, private office and energy construction segments, with net positive readings of 26, 25 and 24 percent respectively.

Contractors are also optimistic about some public sector construction segments, especially those segments that aren't entirely dependent on federal funding. Contractors gave the outlook for water and sewer construction a new positive of 24 percent. They have the highway market a net positive reading of 16 percent and higher education 15 percent.

Seventy-nine percent of firms report they plan to purchase new construction equipment in 2015, and 81 percent plan to lease new equipment. However, the scope of those investments is likely to be limited, with roughly two-thirds of firms that plan to buy or lease equipment reporting they will invest $250,000 or less.

Credit conditions appear to be less of a concern for contractors in 2015 as they were during the height of the downturn, association officials added. Only 7 percent of firms report having a hard time getting bank loans this year while only 24 percent report customers' projects are being delayed or cancelled because of tight credit conditions.

"Despite the overall optimism, some challenges remain for the industry," said Ken Simonson, the association's chief economist. "In particular, as construction firms continue to expand, they will continue to have a difficult time finding enough skilled construction workers."

Among respondents who are trying to hire workers, 87 percent report having a hard time filling key professional and craft worker positions. In particular, 76 percent of firms that are hiring report having a hard time finding qualified craft workers while 62 percent say the same about professional positions such as project managers, supervisors and estimators.

Even as firms struggle with growing worker shortages, they anticipate paying more to provide health care. Eighty-one percent of firms report they expect the cost of providing health care insurance for their employees will increase in 2015, while only 1 percent expect to pay less. Despite that, only 1 percent of firms report they plan to reduce the amount of health care coverage they provide this year, Simonson noted.

Large numbers of contractors are worried about the potential impact a number of proposed new federal regulations will have on their business operations, Sandherr said. Thirty-seven percent of respondents report they are concerned about the Environmental Protection Agency's efforts to expand their jurisdiction over wetlands. Thirty-six percent of contractors worry that new regulations forcing contractors to keep detailed records of all job applicants will have a negative impact. And 35 percent are worried about the impact of proposed new silica rules.

Association officials added that survey respondents would prefer that Washington officials work on other priorities. Seventy-six percent of firms reported listed having Washington find ways to make it easier to prepare the next generation of skilled workers as a top priority. Sixty percent want Congress to reform the tax code and 59 percent want Congress to repeal all or part of the Affordable Care Act.

Sandherr added that the association plans to continue efforts like the Hardhats for Highways campaign to educate members of Congress about the need for new federal infrastructure investments, including for aging roads and bridges. He added that association members and officials also will continue to push for action on the measures outlined in the association's Workforce Development Plan and would also work to get the Obama administration to rethink its current regulatory approach.

"With a little luck and a lot of effort, we will make sure the construction industry has the support it needs to continue expanding in 2015 and beyond," Sandherr said.

The Outlook was based on survey results from over 900 construction firms from 48 states and the District of Columbia. Varying numbers responded to each question. Contractors of every size answered over 30 questions about their hiring, equipment purchasing and business plans.

Construction Employment Increased in All But 10 States in 2014

How to Connect During Crisis: Email Marketing and COVID-19

The COVID-19 crisis has changed everything about everything - even marketing.
May 14, 2020

Snorkel, a leading global manufacturer of mobile elevating work platforms, announces its partnership with Caterpillar Inc. as a preferred vendor for The Cat Allied Vendor Program.
Snorkel
April 29, 2020
Follow Us