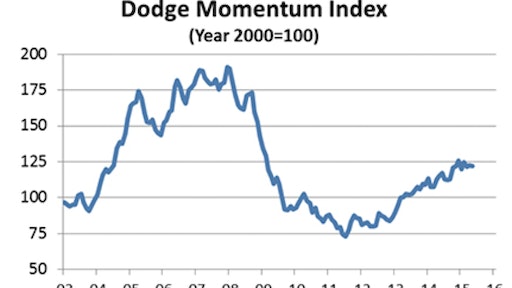 After rising over the course of 2014, the Index thus far in 2015 has been basically flat, consistent with other measures highlighting sluggish economic conditions.

The Dodge Momentum Index held steady at 122.3 (2000=100) in May, according to Dodge Data & Analytics. The Momentum Index is a monthly measure of the first (or initial) report for nonresidential building projects in planning, which have been shown to lead construction spending for nonresidential buildings by a full year. After rising over the course of 2014, the Index thus far in 2015 has been basically flat, consistent with other measures highlighting sluggish economic conditions. Even with this near term pause, the Index in May was still up 6.1 percent compared to the same month a year ago. Several factors are expected to help the Index move beyond its current plateau and regain an upward track later in 2015, including further improvement by market fundamentals for commercial real estate and the increased funding support for construction projects coming from state and local governments.

In May, planning activity by sector was varied, with institutional building climbing 3.1 percent while commercial building fell 2.2 percent. Within the institutional sector there were eight projects that exceeded $100 million, including the $466 million Vassar Brothers Medical Center Pavilion in Poughkeepsie, N.Y., and the $400 million Covenant Medical Center Tower in Lubbock, Texas. There were six commercial projects in May valued at over $100 million, including a $300 million warehouse and distribution center in Kearny, N.J., and a $113 million retail center in Sarasota, Fla.