Despite the diminished outlook, the new forecast expects the highest total for construction put in place since 2008 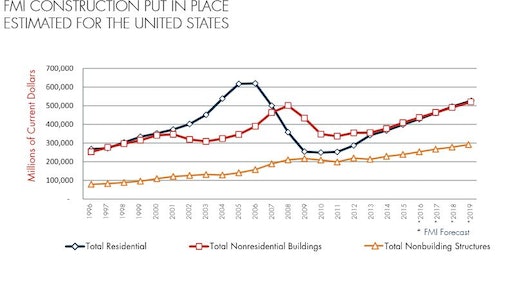 Although FMI reduced its forecast from the first-quarter level, the outlook reports the highest total for construction put in place since 2008. 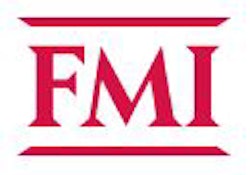 Construction activities are expected to grow at 5% in 2015, down from the 8% growth forecast in Q1 2015, according to FMI Corp.’s Q2 Construction Outlook.

Although the prediction is significantly lower than last quarter, the outlook reports the highest total for construction put in place since 2008. “Construction spending continues to build on the rapid growth experienced in the industry last year,” said Chris Daum, senior managing director and president of Investment Banking at FMI Corporation.

The sector with the highest growth prospect is manufacturing, which continues to show gains in construction activity despite several factors that point to slower growth for 2016 through the forecast horizon of 2019. That is partly due to the cyclical nature of industry as well as the sudden change in the value of the dollar affecting exports, among other factors.

With a 5% cut on the horizon, the sector with the biggest setback is power. The power industry is in flux due to changing fuel supplies using more natural gas and less coal as well as variable rates of growth in alternative energy sources like solar and wind.

Forecast for some of the key sectors:

Manufacturing – FMI expects another 17% growth for 2015, after seeing 15% growth in manufacturing construction in 2014, despite some ups and down in manufacturing activity. The manufacturing renaissance will continue to be susceptible to future energy prices and markets in the U.S. and abroad, and the double-digit growth is expected to slow to just 8% in 2016.

Commercial – Commercial construction is expected to grow at 13% in 2015 to $64,999 billion then slow to 7% growth in 2016. Consumers remain relatively confident about the economy, but they are also remaining conservative in their discretionary spending, at least until wage recovery improves.

Amusement and Recreation – Construction for the amusement and recreation sector grew sharply to 7% in 2014 with another 9% growth expected in 2015. Although continued growth in major sports stadiums supports this sector, there are a number of smaller towns and colleges improving their sports facilities. In the gaming sector, there are trends to rethink facilities for broader market appeal.

Residential – FMI expects solid growth of 8% for 2015 and for that growth rate to remain steady through 2019. Multifamily construction continues in double-digit growth through 2016. Even though sales of new single-family homes grew to 517,000 in April, 26.1% above April 2014, many would-be homebuyers are holding off until their wages go up, and they can save enough money to meet new lending standards.

Religious – Religious construction continues to slow and is expected to be 5% under last quarter’s results. Areas of growth will likely be renovation, as newly formed congregations move into vacated retail space or reoccupy church buildings abandoned by other faiths.

Public Safety – Public safety is anticipated to continue to slow by 3% in 2015 after the decrease of 3% in 2014. Although federal prison populations have recently decreased, the overall prison system is still overcrowded. Reviews of mandatory sentencing and early release programs may help decrease some crowding.

Download a copy of the current FMI Construction Outlook

[VIDEO]Why FMI Expects Infrastructure Construction Growth in Many US Sectors