A 6.5% increase in residential fixed investment could not overcome sliding exports and government spending 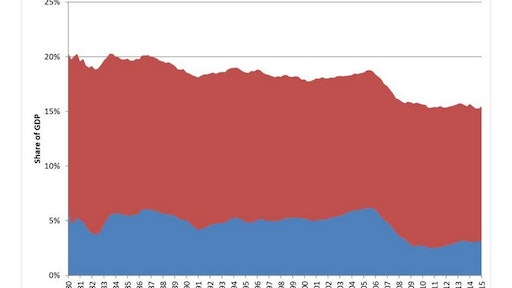 The U.S. economy shrank by a seasonally adjusted annual rate of 0.2% over the first quarter of 2015.

The decline in this third and final Q1 GDP estimate of economic output reflected a 0.6% decline in government consumption, a 5.9% decrease in exports, and a 7.1% increase in imports. Imports subtract from GDP. The negative effect of these variables was partially offset by a 2.1% increase in personal consumption, and a 2.4% increase for private domestic investment.

Residential fixed investment, a component of gross private domestic investment, rose by a seasonally adjusted annual rate of 6.5%. Housing’s share of GDP rose to 15.45% of GDP at the start of the year, with home building and remodeling yielding 3.14 percentage points of that total.

Taken together, housing’s share of GDP was 15.45% for the start of the year.

Historically, RFI has averaged roughly 5% of GDP while housing services have averaged between 12% and 13%, for a combined 17% to 18% of GDP. These shares tend to vary over the business cycle.

Construction Expected to Rebound Sharply in Second Half of 2015