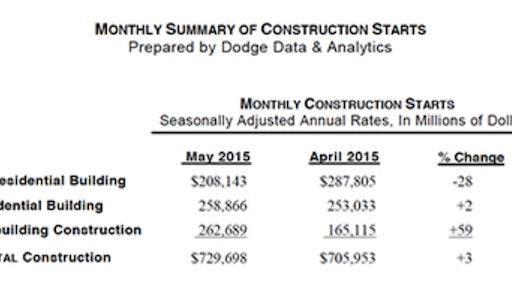 The nonbuilding construction sector provided much of the lift, given an exceptionally strong amount reported for the electric power and gas plant category, which reflected a massive liquefied natural gas (LNG) export terminal project in Texas being entered as a May start. Residential building showed modest improvement in May, helped by more multifamily housing, while nonresidential building fell sharply from its heightened April volume.

At a seasonally adjusted annual rate of $729.7 billion, new construction starts in May climbed 3 percent compared to April’s already elevated pace, according to Dodge Data & Analytics. The nonbuilding construction sector provided much of the lift, given an exceptionally strong amount reported for the electric power and gas plant category, which reflected a massive liquefied natural gas (LNG) export terminal project in Texas being entered as a May start.

Residential building showed modest improvement in May, helped by more multifamily housing, while nonresidential building fell sharply from its heightened April volume. During the first five months of 2015, total construction starts on an unadjusted basis were reported at $272.5 billion, up 25 percent from the same period a year ago. The current year has included the start of 12 massive projects valued each at $1 billion or greater, compared to five such projects during the corresponding period of 2014. If these projects valued at $1 billion or greater are excluded, total construction starts on an unadjusted basis would be up a more moderate 10 percent year-to-date.

The May statistics raised the Dodge Index to 154 (2000=100), up from a revised 149 for April. Through the first five months of 2015 the Dodge Index averaged 145, boosted by particularly strong readings in February, April and May. “The presence of unusually large projects, notably several LNG terminals and several petrochemical plants, continues to lift the volume of total construction starts above its underlying trend,” stated Robert A. Murray, chief economist for Dodge Data & Analytics. “This lift from unusually large projects is expected to become less pronounced as 2015 proceeds, which still leaves total construction starts growing at about a 10 percent clip. Nonresidential building is witnessing a broader expansion this year, with its institutional building segment contributing to the upturn along with the strengthening trend already established for commercial building. Residential building is seeing further growth for multifamily housing although any upward movement by single family housing remains hesitant. The public works sector has proven to be surprisingly resilient so far in 2015, as states and localities have picked up some of the slack from essentially flat federal funding. On a cautionary note, public works still faces near term uncertainty, since the recently expired federal transportation legislation was extended by Congress only through the end of July, and the Highway Trust Fund will need to be shored up once again with additional funding.”

Nonbuilding construction in May jumped 59 percent to $262.7 billion (annual rate). The electric power and gas plant category led the way, soaring 229 percent, which was due in large measure to the massive $9 billion LNG export terminal in Corpus Christi, Texas, being included as a May start.

The huge increase for the electric power and gas plant category in May also reflected the start of several very large power plants, including two solar power facilities in California, valued at $1 billion and $582 million respectively, as well as a $600 million natural gas-fired power plant in Indiana.

While the first five months of 2015 have shown a substantially higher amount of gas plant-related projects, there’s also been a greater amount of power plant projects compared to the same period a year ago. The public works categories as a group receded 3 percent in May. Highway and bridge construction slipped 1 percent, although May did include the start of two major bridge projects — a $158 million bridge replacement in Indiana and a $146 million bridge upgrade in New Jersey.

Through the first five months of 2015, the top 10 states for highway and bridge construction were:

The miscellaneous public works category, which includes such diverse project types as rail-related work and pipelines, fell 38 percent in May. The previous month had included $690 million for the start of rail-related work in the Fresno, Calif., area as part of the California high-speed rail project, and by contrast the largest miscellaneous public works construction start in May was a $67 million natural gas pipeline in Pennsylvania.

The environmental public works categories all showed strong percentage gains in May. Water supply construction advanced 28 percent, aided by the start of an $84 million water treatment plant in Alabama, while river/harbor development and sewer construction showed gains of 26 percent and 23 percent respectively.

Residential building, at $258.9 billion (annual rate), edged up 2 percent in May. Multifamily housing improved 7 percent, regaining upward momentum after settling back during the previous two months. May featured the start of eight multifamily projects valued each in excess of $100 million, with the largest being a $392 million project located in Long Island City, N.Y. Of these eight projects, four were located in the New York metropolitan area, with the other four located in San Jose, Calif., Los Angeles, Austin, Texas, and Chicago.

Through the first five months of 2015, the top five metropolitan areas in terms of the dollar amount of multifamily starts were:

Single family housing in May was unchanged from its April pace, as its pattern of very slight increases followed by flat activity continues. On a regional basis, single family housing in May showed a 3 percent decline in the West, no change in the South Atlantic, 2 percent improvement in the South Central and Midwest, and a 7 percent rebound in the Northeast. Murray noted, “Mortgage rates remain very low, with the 30-year fixed rate currently standing at 4.0 percent, but first-time homebuyers have yet to give much if any lift to housing demand as the result of such factors as still tight lending standards, high student debt and the preference by Millennials to stay with rental units in urban areas.”

Nonresidential building in May fell 28 percent to $208.1 billion (annual rate), pulling back after surging 58 percent in April. The manufacturing building category in April had provided a sizeable boost, rising 513 percent as the result of an $8.1 billion petrochemical plant in Louisiana being entered as a construction start.

The commercial categories as a group increased 16 percent in May. Warehouse construction registered a substantial 95 percent hike, supported by the start of a $207 million warehouse in Texas and a $90 million warehouse in South Carolina. Hotel construction in May climbed 90 percent after a weak April and featured groundbreaking for such projects as the $342 million Resorts World & Casino (initial phase) in Las Vegas and the $196 million Westin hotel tower in Philadelphia.

Store construction in May improved 7 percent, supported by the start of a $210 million shopping mall in Kapolei, Hawaii, and a $105 million shopping center in the Allentown, Penn., area. Office construction in May retreated 30 percent following an April that included $1.0 billion for the office portion of a high-rise at the Hudson Yards development in New York. May did include the start of several large office interior renovation projects, such as $150 million for work at the 10 Hudson Yards building in New York and $60 million for work at the Fan Pier site in Boston.

The healthcare facilities category in May registered a strong 34 percent gain, aided by the start of the $750 million Memorial Sloan Kettering Cancer Center in New York and a $200 million hospital in Oxford, Miss. The public buildings category in May rose 33 percent, helped by the start of a $95 million courthouse expansion in Waukegan, Ill., and a $66 million detention facility in Bismarck, N.D.

On the negative side, the amusement category in May retreated 4 percent after a strong April, although May did include the start of the $149 million American Dream Water and Amusement Park in East Rutherford, N.J. Decreased activity was also reported for church construction, down 6 percent; and transportation terminal work, down 25 percent. The transportation terminal decline followed a strong April that featured several large projects, and May did include $400 million for the start of two terminal upgrades at Los Angeles International Airport.