Construction Expected to Rebound Sharply in Second Half of 2015 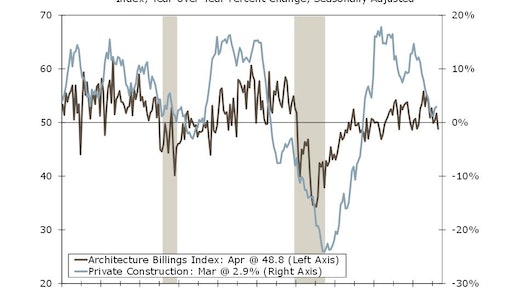 The American Institute of Architects' Architecture Billing Index (black line) indicates billings growth whenever it is above 50 (left axis). The index is considered to be a pretty reliable leading indicator of private construction activity 9 to 12 months in the future.

Non-residential construction, led by manufacturing and commercial buildings, should rebound sharply in the second half of 2015, says Wells Fargo Senior Economist Anika Khan.

Khan spoke to attendees at a regional Association of Equipment Manufacturers (AEM) membership event hosted by Cummins Inc. in Columbus, IN.

Khan said the construction industry’s underlying economic fundamentals – and the economy as a whole – are much better than the estimated shrinking of U.S. GDP in the first-quarter suggests.

Anticipating upward revisions to Q1 GDP and observing alternate measures of economic activity, Khan said it’s clear that the pace of growth may be sluggish, but “it’s definitely not negative.”

Khan said key factors holding back economic growth in the first half of 2015 included:

While the first two factors have dissipated, there are still lingering effects from the stronger dollar and lower oil prices.

Khan said the labor market is “the real strength of the economy” and should continue to grow. However, manufacturers needed to watch for not an increase in interest rates, but a “winding down of the Fed’s balance sheet” as it begins to scale back its investments.

Pervious Concrete: How to Properly Place and Cure

Avoid making these common mistakes before and during the hiring process; plus, a bonus 8 mistakes to avoid after hiring
July 31, 2019
Infrastructure

Familiarize yourself with the buy-out process many project managers go through and use these steps to make you the most desirable subcontractor for a job
Ron Roberts
April 3, 2013

SR Construction is leading the fight against COVID-19 with the world’s first deployment of the Xtreme Opti-Clean Cube.
August 14, 2020

The AED Foundation (AEDF) is committed to accrediting 100 college programs by 2024, working consistently with schools to provide this distinction.
AED Foundation
August 11, 2020

ABC’s Greg Sizemore digs into the opportunities the construction industry has to rebuild its workforce during and because of the pandemic environment.
Associated Builders and Contractors Inc. (ABC)
August 13, 2020

Building through the coronavirus pandemic is demanding unconventional approaches to managing schedules, social distancing and negotiation to get the job done.
August 10, 2020
Follow Us