Quick Coupler Safety Is No Accident 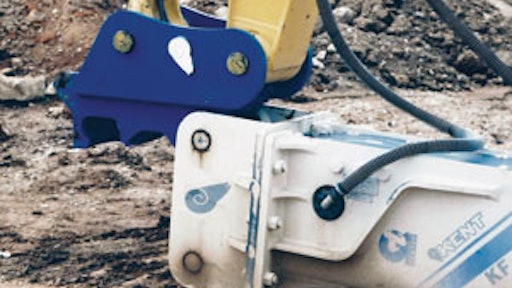 It started innocently enough. An excavator operator was holding a bucket over two trench workers' heads to protect them from gravel that was being placed into the trench via a loader. The bucket unintentionally detached from the quick coupler, knocking over one employee and fatally injuring the other.

Another recent incident involving premature detachment of a bucket, while not deadly, broke both legs of a construction worker who was working in a 4-ft.-deep excavation.

It's likely you have heard about these or similar accidents over the past few years. Since January 1998, there have been 16 incidents investigated by OSHA in which workers were struck by excavator buckets unintentionally released from their quick-coupling devices; nine of these incidents were fatal.

The concept behind quick couplers is noble enough. These aftermarket devices enable you to make quick attachment changes on hydraulic excavators. For example, you can switch from a large excavating bucket to a smaller finishing bucket, then move to a hammer or grapple for entirely different tasks.

"Quick couplers have the ability to increase the versatility of a machine," says Chris MacKenzie, general manager of National Attachments. "It could be a bucket, a pulverizer, a grapple or any number of different attachments that could be used with the same machine on the same jobsite. Theoretically, the concept is to expedite changing the tool while reducing the need for more machines on the job."

The time savings are very attractive. Quick couplers can dramatically trim the time it takes to switch attachments - down from about 45 to 60 minutes to less than one minute in some cases.

"Some contractors may be changing attachments as many as 50 to 100 times a day," notes Rick Bramel, western regional manager at Hendrix. In such cases, a tremendous amount of efficiency and productivity is gained by switching attachments via a quick coupler.

But increased speed shouldn't come at the expense of safety. "Contractors shouldn't overlook safety while they're trying to speed things up," advises MacKenzie. "Even though they've increased the versatility and speed of the machine, it's important to consider the safety precautions outlined by each manufacturer when changing an attachment."

Manufacturers stress the importance of not cutting corners when it comes to mounting attachments via a quick coupler. "Each manufacturer has its own safety checklist," notes MacKenzie. "But the intent is the same - to confirm an adequate, secure locking mechanism has been engaged prior to deploying a newly attached device."

As an immediate response to unintentional detachments, many manufacturers designed a mechanical locking pin that is manually inserted behind the front or rear lever of a coupler. These pins have gone a long way toward decreasing the probability of an attachment unintentionally releasing.

However, not all contractors and/or employees are aware of the hazard of unintentional release or even the existence of the locking pins. This can open the door to accidents. "People get in a hurry, or maybe they don't even realize they need to use a locking pin," says David Bell, sales manager for Kent Demolition Tool. "There are a lot of reasons why an operator may not use a manual locking pin."

To address this, many manufacturers are now incorporating automatic locking pins that eliminate the need for an operator to physically leave the cab to insert a pin. These new systems are often designed with redundancies to enhance safety.

For example, Kent Demolition Tool recently introduced an automatic coupler that features triple redundancies. "A hydraulic hammer can send some vibration up through the boom and stick," says Bell. "If you have something other than a direct pin, you don't want it shaking itself off of a coupler. So we designed a coupler that would handle a hydraulic hammer and some vibrating weight at the end of a dipper stick."

In this design, the coupler can only be disengaged when the release command is given (by releasing a positive switch in the cab) and the coupler is positioned in its full curl position. It also uses the main hydraulic system on the excavator for a constant supply of high-pressure oil, which keeps the coupler's internal cylinder locked at all times during engagement. A two-position safety switch and an audible alarm that sounds during disengagement further enhance safety.

The Hendrix II coupler also includes redundancy features such as a double-acting cylinder with check valve, integrated compression spring and even a mechanical locking pin.

Maintain and train for safe operation

Even with physical safety features in place, manufacturers stress the importance of maintenance and training in improving safety when using quick couplers.

"The coupler is an attachment, and like any other attachment, it needs to be maintained," says Bramel.

Keep the coupler as clean as possible and grease any areas that require it. "And whenever the opportunity is available, clean the machine and run it through a cycle without anything hooked up to make sure it's still working," says Bell.

Bell also advises paying close attention to coupler operation. "Operators need to have the same sense of awareness about using a quick coupler as they have when operating the excavator," he states. "They need to be all hands and eyes, and pay attention to what they're doing to operate the equipment safely."

"There needs to be an increased awareness of the probability of danger," agrees MacKenzie. "Operators should never swing a bucket over workers and never let workers under the bucket. They also should never operate an unsafe coupler, and should report any unsafe couplers to their supervisors. And never operate a coupler without the supplemental safety device in place. It may sound intuitive, but in the highly accelerated pace of the jobsite, anything can happen."

"It's easy for operators to become complacent about how to use quick couplers," Bramel adds. "Many unintentional detachments are due to operator error and not getting it hooked up properly. We focus on training to minimize the potential, as well as stress the importance of maintenance." ¦

OSHA offers these safety tips when using quick couplers on the jobsite:

Be sure to include positive locking pins and other devices that need to be manually installed.