The problem: how to protect construction workers from dangerous noise while still allowing them to communicate warnings and other vital information. 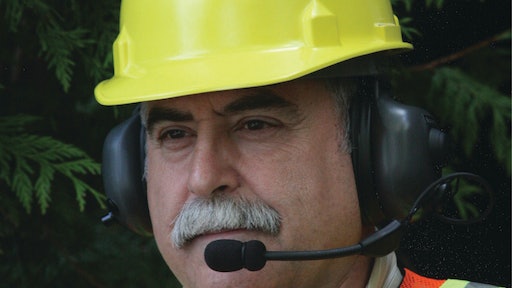 Wireless headsets provide both hearing protection and the ability for clear communication on the jobsite.

Clear communication is the most important element in maintaining a safe, productive, and effective construction site. Occupational safety research routinely cites poor communication as the leading cause of accidents involving everything from forklifts[1] and mining[2] to public utilities[3] and ferries[4]. Despite a tremendous diversity of circumstances, all of these incidents share one truth: tragedy could have been avoided if the work crews and supervisors had been able to communicate clearly.

Construction sites pose a unique challenge to clear communication. Construction equipment can emit sounds in excess of 125 decibels (dB), well above the human pain threshold and making normal conversation impossible. Ironically, while protective devices such as earmuffs prevent hearing loss, they can make a work site less safe because they also prevent workers from hearing each other. Workers can use hand signals to communicate, but hand signals are often complex, easily misunderstood, and require line-of-sight visibility to be effective.

This situation presents a difficult problem: how to protect workers from dangerous noise while still allowing them to communicate warnings and other vital information during the performance of shared tasks.

Recent advancements in technology provide a solution to this problem in the form of portable wireless communication systems. At the heart of these systems, wireless headsets reduce background noise and allow work crews of almost any size to communicate clearly, even on opposite sides of a work site. Properly designed, they also leave the worker’s hands free.

Wireless headsets are designed to fit completely over the ear for hearing protection and are outfitted with a boom microphone and ear speakers to allow voice transmission and reception through a mobile base station using a wireless signal. When coupled with a mobile base station, they create the equivalent of a local audio network wherever they are deployed. In more advanced systems, the local audio network itself can be connected to a remote work site or dispatch center by means of a mobile radio interface, as shown in Figure 1.

Ideally, radio-interface systems should also allow crew supervisors to select which headsets will be allowed to broadcast over the radio (usually by a push-to-talk button on the headset) and which will provide “local only” communication. Configurability greatly reduces the amount of “chatter” that can occur with systems that do not offer this functionality. Up to 60 users can communicate in an efficient and orderly fashion on a configurable wireless system, making it an ideal solution for even the largest work crews.

When purchasing a wireless communication system, make sure the system you are considering is truly wireless. Some “wireless” systems actually require a wire from the headset to a radio or belt pack. While these systems allow freedom of movement, the wire can become entangled. Moreover, belt packs usually have less transmission range than self-contained systems worn on the head.

Equally as important, look for full-duplex functionality. Some wireless systems are only half-duplex, meaning they allow communication in both directions, but only one direction at a time, similar to a walkie-talkie. Full-duplex systems are preferable because they allow communication in both directions simultaneously. Full-duplex systems also provide hands-free communication within the local audio network; push-to-talk buttons are only used when the user is switching from the local network to the mobile radio.

Range is also an important consideration; a minimum line-of-sight range of 1,500 feet is highly recommended. Typically, longer-range systems will use DECT rather than Bluetooth technology. In addition to greater coverage area, DECT signals are less subject to RF interference.

Finally, before purchasing a system, physically try on one of the headsets. Because a headset will often be worn for hours at a time, it should be lightweight and fit snugly but comfortably over the ears. The controls should be simple and readily accessible, allowing hands-free operation. For maximum flexibility, make sure styles are available for wearing over the head, as well as under a hard hat.

Wireless headset systems are a safe and reliable method of ensuring clear communication in construction environments. As the newspapers all too often remind us, poor communication can lead to tragedy.

Reed Stager is the Chief Operating Officer of Sonetics Corp., a global supplier of team communication solutions for challenging environments. He can be reached at Reed.Stager@soneticscorp.com.

[1] Canadian Centre for Occupational Health and Safety. Common factors in forklift accidents. May 2, 2011.

Team Communications for Construction and Utilities: Keeping Your Crew Safe, Effective, and Productive