Getting Misty By the Bay 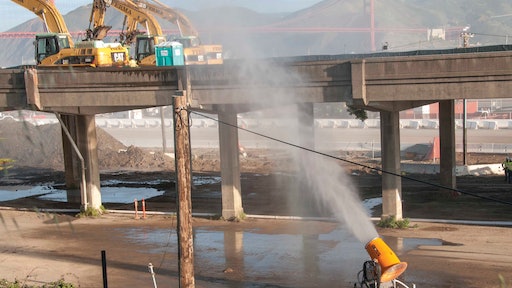 Originally constructed in 1936, Doyle Drive is a busy thoroughfare that carries thousands of cars per hour in peak traffic periods. In 1990, it underwent a full seismic evaluation and was determined to have reached the end of its useful service life, deemed structurally and seismically deficient due to the ravages of time and continuous use.

Its replacement will be an entirely new Presidio Parkway design, including two short tunnels, a wide landscaped median and engineered transitions to city streets to ease traffic and improve safety. Once completed, the new parkway will also produce a dramatic visual change, as the bulky concrete Doyle Drive structures are removed to reveal striking views of the Presidio and San Francisco Bay.

In the Spring of 2010, Phase I of the project got underway with the construction of a tunnel and detour roadway to shift traffic completely off of Doyle Drive. Demolition of the old structure began in 2012, involving approximately 4,700 linear feet of roadway, including some 150 spans in three distinct structures. The plan required that the road be completely closed for just one weekend to demolish the entire length.

“There was only a 57-hour window to demolish the existing structure and complete construction of the bypass before we had to reopen the roadway to vehicle traffic,” explains Andrew Yan, California DOT resident engineer. “The structure was divided into four main components, all to be demolished within the same time frame. It was a tall order, but we planned out every detail.”

The takedown required a fleet of 40 pieces of demolition equipment, including 20 hydraulic excavators outfitted with a variety of work tools, such as hammers, grapples, pulverizers and shears. Crews also used backhoe-loaders, track loaders, wheeled loaders and articulated dump trucks, all running continuously to meet the tight deadline.

Because of its proximity to the Presidio, an historic national park that remained open to the public during demolition, the contract called for a dust control plan to prevent all visible dust from leaving the project boundaries while work was underway.

“In some places, the public areas were less than 100 ft. away from the demolition activity,” Yan notes. “There’s also a residential neighborhood and business corridor adjacent to Doyle Drive. In addition, we had to consider the nearby marsh, wetlands and forest, as well as the wildlife within those habitats.”

With dust suppression such a high priority, the CalTrans researched a number of equipment options to supplement traditional water trucks and manual spraying. “Because we had simultaneous demolition in four distinct locations on this project, we needed dust control over a very wide area,” Yan observes. “But the manpower we could commit to that was limited. The initial equipment designs we reviewed didn’t convince us that they could deliver the coverage we required.”

Yan remembered that CalTrans project faced similar dust suppression issues on the Oakland Bay Bridge West Approach in San Francisco. He knew that engineers had successfully controlled the demolition dust on that job with large atomized misting units from Dust Control Technology (DCT). After reviewing specifications on the various models and discussing the project requirements with DCT, he arranged a rental of eight DustBoss DB-60s, with on-site training supplied by the manufacturer.

The DB-60 is a large-scale suppression unit with special atomizing nozzles that create an “engineered mist,” sizing the droplets specifically for optimum dust control (typically 50 to 200 microns). A 25-hp fan launches the droplets over long distances, allowing one full-oscillation machine to cover nearly 125,000 sq. ft.

With the significant reduction in airborne dust, Yan and his crews contributed to a healthier workplace on the Doyle Drive demolition project, while protecting the surrounding communities and natural environment.

“I was particularly impressed by the range of the unit, and the relatively low noise level during operation,” he says. “The ability to easily mobilize and relocate the units as needed was also a big advantage on this job.”

“This was a very high-profile job,” Yan comments. “Our goal was to take all practical measures, using the best technology available, to mitigate the demolition dust and safeguard people, property and the environment. I would recommend the DustBoss on future contracts of this type.”