A crew of three to four workers took three months to complete the complex roofing project with zero injuries reported. 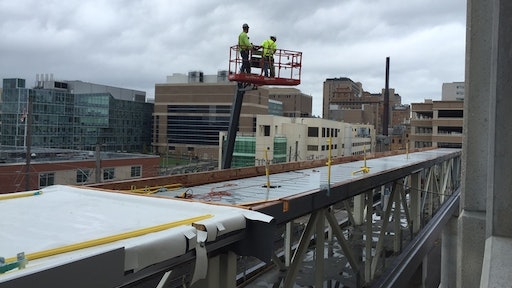 Bade Roofing Company reported zero injuries on a challenging project that required its workers to scale a 1,200-ft.-long, 13-ft.-wide elevated pedestrian skywalk through one of the busiest medical campuses in St. Louis, MO.

The East-West Connector project on the BJC HealthCare/Washington University Medical Center campus was completed in March 2017, following 8.5 months of construction. The massive concrete, glass and steel structure reaches heights of 40 ft. above street level and travels nearly a quarter of a mile to connect four parking garages and various buildings throughout the busy campus.

Bade crews installed a tapered roof system - a Firestone induction-welded white TPO membrane with R20 insulation and a 1/2-in. cover board - over the entire length of the pedestrian bridge. The roofing project was broken into seven areas and each area had to be installed separately and not in order. This meant Bade's workers had to mobilize and demobilize frequently and splice newly installed roof areas to ones installed sometimes months before.

A crew of three to four workers took three months to complete the complex roofing project. In a single, 15-hour day, two workers roofed a 120-ft. span of the bridge. Given the logistics and safety concerns, this was an amazing feat, said Bade Roofing CEO David Bade.

"Work was done around heavy traffic areas and functioning parking garages. Certain work areas had to be shut down and gated off, but other areas could only be worked on during a short time frame when traffic was light," said Bade.

"There was a section of the connector that crossed Taylor Ave that was particularly difficult from a coordination stand point. This strip of road is the main thoroughfare on the campus, and shut down of the entire road was a nearly impossible request," he points out. "However, during one weekend, the road was allowed to be shut down. Due to the fact that five different trades all needed to complete their work over the road in this two-day time slot, crowding in this relatively small area was definitely an issue. The roof had to be installed before other trades could do their portion of work, so our two-day time slot turned into one day."

Bade crews utilized a lifeline stanchion system, installed every 30 ft. along the top of the skywalk. The stanchions had to be clamped to the structural I-beams, which required cutting through 18-gauge metal decking to get to them.

"Safety on the project had to be handled much like a road bridge," said Bade. "It made roofing very slow and tedious, but safety was a major concern and the project was completed with no incidents."

KAI Design & Build, along with joint venture partner Paric Corporation, served as the architect and general contractor on the project. KAI Design & Build's construction department led the project, with KAI also providing its architectural design. The project is a component of the BJC HealthCare/Washington University Medical Center Campus Renewal Project - a long-term project to transform a 16-block campus that includes Barnes-Jewish Hospital, St. Louis Children's Hospital and the Washington University School of Medicine. The renewal project is focused on improving the patient and family experience from both a clinical and campus perspective.

Completed in March 2017 after only 264 construction days, the extensive pedestrian connector is a 13-ft.-wide tube elevated to heights averaging 40 ft. above street level. It connects more than 6,000 parking spaces to the main hospital complex on the BJC HealthCare/Washington University Medical Center campus.

The connector is constructed of tinted, Low-E glass; prefabricated steel truss sections (in total weighing 380 tons); 14 concrete piers (2,500 cu. yds. of total concrete); and over 500 sections of glass panels. The connector's roof consists of an energy-efficient white, mechanically-fastened TPO roofing system. The interior, which could not be completed until the connector was enclosed, incorporates field carpet tiles for its flooring and LED lay-in ceiling fixtures strung along its entire length.

Muddy, wet and icy walking and working surfaces contribute to higher rates of injury during the winter months, but these types of accidents are preventable.
Amy Wunderlin
January 27, 2020

Although ANSI has pushed back the deadline from December to early 2020, it's still the perfect time to start transitioning your mobile elevated work platforms
December 12, 2019

Rotating Deck Anchor with 360° self-orienting D-ring for use in temporary and reusable applications.
FallTech
July 26, 2019

[VIDEO] Fall Arrested? Suspension Trauma is Why You Must Have a Rescue Plan

Hanging in a fall-safety harness too long can cause suspension trauma; this recorded webinar explains how you can prevent injury after averting a fatality
July 8, 2019
Construction News

The contractor has also been indicted for workplace manslaughter
June 21, 2019

In the event of a fall, these harnesses help users achieve a gravity override position to relieve pressure on their femoral arteries while they await rescue.
WERNER / WernerCo
June 6, 2019
Construction News

One of 20 new fall protection products PSG is launching in 2019 for the construction, oil and gas, energy, utilities, telecom, mining and transportation industries
Pure Safety Group
May 6, 2019

These 5 measures from OSHA can help keep workers safe from falls on the jobsite
January 9, 2019

Werner to Train 25,000 Construction Professionals During Month of May

Fall protection and ladder safety training planned during annual safety event, with six free trainings to be given away in 2018
WERNER / WernerCo
May 9, 2018

SureWerx Now Brings Pro Tool, Equipment and Safety Products to the US

What You Need to Know About OSHA's Fall Protection Changes

New OSHA rules taking affect in 2017 and 2018 have impacts on both the construction industry and general industry
June 20, 2017
Follow Us