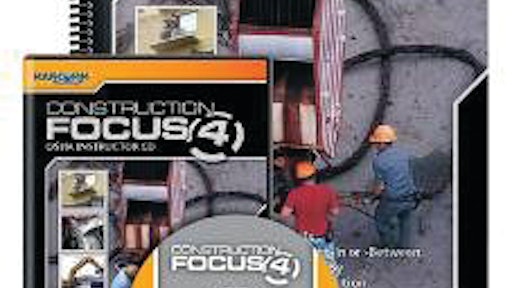 DAVENPORT, IA – Deadly falls. Lethal electrocutions. Being crushed or caught between objects. Being struck by moving machinery or objects.

Those may sound like chilling scenes from the latest Final Destination sequel, but in fact, those four types of accidents are the leading causes of death in the construction industry, according to the Occupational Health and Safety Administration (OSHA). In response to a recent OSHA training mandate, MANCOMM, a national safety and compliance publisher, has released two related publications which address the top four construction industry hazards.

"OSHA now requires a module on these four hazards to be used in both 10- and 30-hour construction outreach courses," said Benjamin Mangan, President of MANCOMM. "MANCOMM approves wholeheartedly of the initiative and has developed two new training resources, Construction Focus 4: Instructor Guide and Student Handbook, that make it easy for safety trainers to provide their trainees with this vital information."

According to Mangan, the content for Construction Focus 4 is divided into four sections – one for each of the major construction industry hazards:

Lesson 2: Caught-In or -Between Hazards
According to OSHA, "caught-in or -between hazards" are defined as: "Injuries resulting from a person being squeezed, caught, crushed, pinched, or compressed between two or more objects, or between parts of an object."

Accidents that would be classified by OSHA as Caught include:

Lesson 3: Struck-By Hazards
"Struck-by hazards" are defined by OSHA as: "Injuries produced by forcible contact or impact between the injured person and an object or piece of equipment."

Lesson 4: Electrocution Hazards
An electrical hazard can be defined as a workplace occurrence that exposes workers to the following dangers, as outlined by the acronym BE SAFE: Burns, Electrocution, Shock, Arc Flash/Arc Blast, Fire, Explosions.

For more information on the Construction Focus 4 publications, visit www.Mancomm.com/focusfourinstructorguide.aspx.