Andy Studdert, chairman & CEO of US-based NES Rentals, was elected as the new president of the International Powered Access Federation at the IPAF annual general meeting (AGM) on March 26, 2015 in Washington, DC. 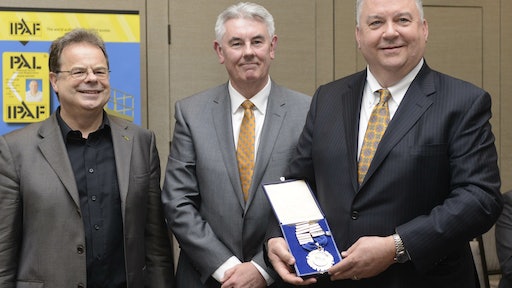 Andy Studdert, chairman & CEO of US-based NES Rentals, was elected as the new president of the International Powered Access Federation at the IPAF annual general meeting (AGM) on March 26, 2015 in Washington, DC. He succeeds Steve Couling, managing director of the IAPS Group.

The strength and stability of the Federation was highlighted in its annual results presented at the AGM by outgoing IPAF president Steve Couling and IPAF CEO Tim Whiteman.

IPAF achieved a 9.4-percent increase in turnover, reaching £4.65 million (approximately €6.1 million or US$7 million) in 2014, up by £0.4 million over 2013. This turnover produced a surplus of 3.2 percent. All surpluses are reinvested in safety, membership and training activities in line with the aims of the not-for-profit Federation.

The accounts and financial statement audited by CLB Coopers show IPAF closing 2014 slightly above budget set by members of the IPAF Council, the Federation’s governing body, as well as the gradual accumulation of reserves to meet the target set by Council.

Incoming IPAF president Andy Studdert paid tribute to his predecessor: “I would like to thank Steve Couling for his commitment to and leadership of IPAF during the past two years,” he said. “Steve is a difficult act to follow. His leadership and vision have been remarkable and inspiring.”

“The ongoing push to eLearning will be a major theme of IPAF’s activities in the next several years,” continued Studdert. “This new technology will change the learning experience for operators and drive the safety message home in a very positive way. A second major area of focus will be embracing, handling and implementing change. We need to look at what we’ve done in the past and ask ourselves if that is still relevant. The way forward for the Federation must be simple, powerful and focussed.”

Andy Studdert is a firm champion of safety in the access industry. He has been the CEO of NES Rentals for the past 11 years, where he instilled a stringent safety culture based on repeatable processes, a culture of intervention and crisis preparation. Almost all the NES Rentals management and staff hold an IPAF PAL Card (Powered Access Licence) as proof of training, including the CEO.

Prior to his time at NES Rentals, Andy Studdert was the COO of United Airlines from 1999 to 2002, where he led the company through the 9/11 crisis. He also served previously as head of fleet operations (1997-1999) and chief information officer (1995-1997) at United Airlines. Prior to joining United, he was a consultant and a banker. He joined the IPAF Board of Directors three years ago and has been instrumental in pushing for the development of the IPAF operator eLearning module. He was voted IPAF Safety Champion of the Year at the 2009 International Awards for Powered Access (IAPAs).