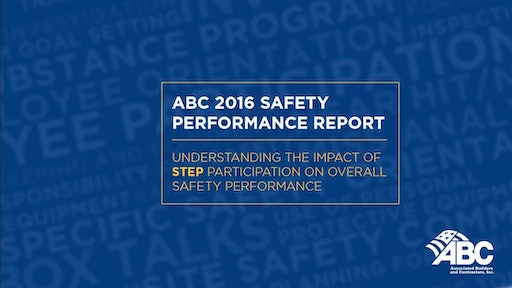 In observance of Safety Week, Associated Builders and Contractors (ABC) released its 2016 Safety Performance Report to further the industry’s understanding of how to make construction jobsites safer. Packed with infographics and practical takeaways, the report documents the dramatic impact of using proactive safety practices to reduce recordable incidents by up to 86%, making the best-performing companies 720% safer than the industry average.

“Until now, relatively little research has been conducted on the correlation between the use of ‘leading indicators,’ such as  substance abuse programs, new hire safety orientation and near-miss investigations, and safer construction jobsites,” said ABC President and CEO Michael Bellaman. “Now we have empirical evidence from members doing real work on real projects that shows that implementing these best practices can produce world-class construction safety programs.”

The Safety Performance Report is based on more than 1,700 sets of unique company data gathered from ABC member companies in construction, heavy construction, civil engineering and specialty trades. It tracked 35 data points from ABC’s 2015 Safety Training Evaluation Process (STEP) participants to determine the correlation between implementing leading indicator use and lagging indicator performance, which is measured by the Total Recordable Incident Rate (TRIR) and Days Away and Restricted or Transferred (DART) rate. Each of the data points collected was sorted using statistically valid methodology developed by the U.S. Bureau of Labor Statistics (BLS) for its annual Occupational Injuries and Illnesses Survey, and combined to produce analyses of STEP participant performance against BLS industry average incidence rates.

STEP was founded in 1989 by the ABC National Environment, Health & Safety (EH&S) Committee as a safety benchmarking and improvement tool. Participating ABC member firms measure their safety processes and policies on 20 key components through a detailed questionnaire with the goal of implementing or enhancing safety programs that reduce jobsite incidence rates. Applying world-class processes dramatically improves safety performance among participants regardless of company size or type of work.

May 5, 2016
Latest in Construction Safety