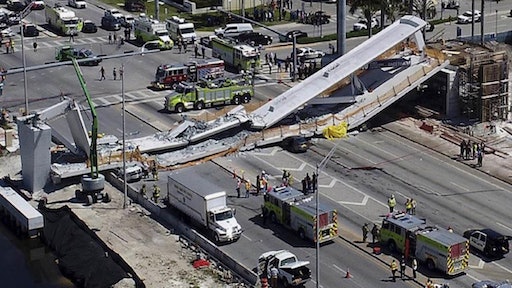 The Occupational Safety & Health Administration (OSHA) has released its report of the investigation into the March 15, 2018, collapse of a pedestrian bridge under construction at Florida International University. The bridge collapse killed six people. The bridge collapse was extensively investigated, and the report concludes that both the Engineer of Record, FIGG Bridge Engineers, Bolton Perez and Associates Inc. (the construction engineer and inspector of the project) and the design-build contractor, Munilla Construction Management Inc., were at fault.

According to the OSHA report:

"FIGG Bridge Engineers (FIGG), the Engineer of Record (EOR), failed to recognize that the bridge was in danger of collapsing when it inspected it hours before the collapse. The concrete truss had developed numerous wide and deep structural cracks jeopardizing the integrity of the bridge. The EOR should have immediately instructed that the bridge be shored at appropriate locations and SW 8th Street be closed. At the time of collapse, the post-tensioning bars were being re-tensioned at the specific instructions of the EOR."

"Networking Engineering Services, Inc. dba Bolton Perez and Associates, Inc. (BPA) was retained by FIU to be the CEI of the project. BPA failed to classify the cracks, which were structural in nature, in accordance with the Florida Department of Transportation (FDOT) requirements. BPA, as a CEI, was expected to exercise its own independent professional judgement in accordance with their contract with FIU and FDOT requirements. With intimate knowledge of extensive cracking on the bridge, BPA failed to recognize that the bridge was in danger of collapsing, and did not recommend to FIU, MCM or others to close the street and shore the bridge, regardless of the opinion held by the EOR."

"Munilla Construction Management, Inc. (MCM), the design-build contractor, was aware that the cracks were “getting larger” as reported by MCM superintendent and quality control personnel on March 12 and 14, 2018. On March 13, 2018, EOR stated in an email to MCM, among the list of facts, that “since Saturday (March 10, 2018), MCM has been monitoring the cracks and they have not grown in size.” MCM should have immediately informed EOR on March 14, 2018, that this assumption was not valid. Despite this oversight on the part of MCM, EOR was provided with photographs and measurements of the cracks in the days leading up to the collapse and was specifically informed by BPA during the morning meeting on March 15, 2018, that the cracks were lengthening. MCM, the design-build contractor, deferred to the decision of EOR and failed to exercise its own independent professional judgement, as a constructor of the bridge, to close the traffic on SW 8th Street until the cause of the cracks were conclusively determined by EOR and peer reviewed."