Custom trench shield spreader arch delivered in five days with no down time for contractor. 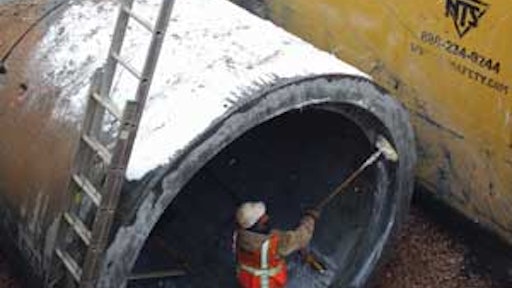 The Central Weber (Utah) Sewer Improvement District recently awarded an important underground utility project to Whitaker Construction Company of Brigham City, Utah.  Whitaker is in the process of installing a new treated water discharge line from the treatment plant to the Weber River.

Whitaker is installing 4,500 linear feet of 108 inch RCT pipe with an outside diameter (O.D.) of 11 feet, with an average depth of 18-20 feet deep.  The pipe is designed with extra thick walls as to be "anti-floatation" in the very high water table in the relatively agricultural, rural area.

There are always numerous challenges when a contractor installs large diameter pipe.  A pipeline like a treated water outfall is typically installed using trench shields to protect workers from trench cave-ins.  But, standard 8 or 10 foot tall trench shields do not provide enough pipe clearance to install a mammoth 11 ft. O.D. reinforced concrete pipe.

Whitaker needed a custom shoring solution for this deep and wide pipeline.

"Pipe clearance really was the biggest problem to overcome," Hartman said about the project.  "Whitaker's first idea really was the best option; to use a spreader arch on a tall trench box."

"Time was critical on this project, and I knew that Efficiency Production had experience with custom engineered trench shields and arches," said Hartman.  "I talked to Mike (West), and together we came up with the idea of a pin-in-place spreader arch that would pin to a 10 foot tall shield, and a second, 4 foot tall stacked box which would give us 140 inches of clearance rather than 112 inches we'd have with just the 10 foot box," explained Hartman.

"Whitaker ordered the shields around December 1st (2008), and wanted them on the jobsite before Christmas," Hartman continued.  "So Efficiency really turned the order around fast, and was able to get the shields and arch on site, on time."

Added West: "A pin-in-place spreader arch is nothing new.  What made this arch unique is that we designed it to pin over the collars of both trench shields, essentially locking the two shields together which made it easier to pull the box through the trench.  But the arch could also be used with just one trench shield."

The stacked trench shields are Efficiency Production HT-6 10x28 and 4x28 foot boxes with 16 foot spreaders on the front end, and hi-clearance arch on the back end.

The job required laying approximately 550 joints of the 8 foot long pipe.  Each stick of pipe weighs approximately 45,000 pounds, so a CAT 385 excavator is used to take the joints of pipe right off the truck and into the trench.  Whitaker is getting eight to 10 pieces of pipe installed a day.  They are also installing three cast-in-place structures, including two ground pipe to box culvert transition structures.

Whitaker Construction Company is located in Brigham City, Utah, 60 miles north of Salt Lake City.  They have been in the underground utility business for 56 years and are still a family owned company.

James McRay is the Marketing & Media Manager for Efficiency Production, Inc.  He can be reached at 800-552-8800;  jmcray@efficiencyproduction.com.

The system comprises just six parts and features a load-bearing capacity of up to 10,000 lbs per leg.
PERI Formwork Systems, Inc.
Oct 2nd, 2019

More than 90,000 workers have been trained in trench safety operations since the initial Trench Safety Stand Down in 2016
United Rentals Inc.
May 20th, 2019
Trench Shoring & Shielding

Video from fox5dc.com shows rescue crews working to get a construction worker out of a trench he fell into
Mar 14th, 2019

Locate Management is an education, training, and assessment service provider for the ground disturbance (excavation) and line locating communities.
May 5th, 2016

Willful citations were issued to Tekton Construction Co. for not providing cave-in protection to employees working in a trench and not providing safe means to enter and exit the trench
Occupational Safety & Health Administration
Jan 13th, 2015

Excavation projects by definition are dangerous operations that require caution and planning, especially when the excavation is intended to create a work space for personnel such as for underground installation repair or installation.
Mike Ross
Dec 16th, 2014