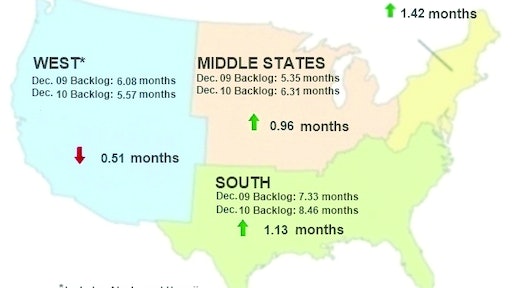 WASHINGTON, D.C. - Associated Builders and Contractors (ABC) today reports that its Construction Backlog Indicator (CBI) for the fourth quarter of 2010 averaged 7.1 months, up from 7 months in the third quarter of last year – an improvement of 1.4 percent. In addition, CBI is up 21.3 percent from a low of 5.8 months in the fourth quarter of 2009. CBI is a forward-looking indicator that measures the amount of construction work under contract to be completed in the future.

"Today’s backlog numbers are consistent with the pace of recovery in overall nonresidential construction activity,” said ABC Chief Economist Anirban Basu. “However, what we are seeing from the fourth quarter 2010 data is a recovery in the construction industry that is more gradual than the rate of expansion in financial markets and the broader economy.

"CBI continues to edge toward levels observed last spring. At that time, federally financed projects were adding to construction backlog as they moved from the planning stage to the bid selection stage,” said Basu. “However, the fourth quarter numbers indicate that federal stimulus is no longer adding to construction backlog in a meaningful way and that the recovery in many privately financed segments remains agonizingly slow. Still, CBI remains well above its historic low point of 5.5 months recorded in January 2010.

"During the fourth quarter of last year, sources of economic improvement and growth expanded to include additional retail segments, rapid export growth and an uptick in business investment,” Basu said. “At the same time, improvement in commercial and institutional construction became more apparent as backlog in these two sectors rose to the highest level in the history of the series,” Basu said.

"The improvement in commercial construction-related backlog is precisely what ABC forecasted in its last report, and we anticipate that this segment will continue to show signs of life and growth in the months ahead,” said Basu.

Construction backlog is improving in the Middle States, which include Indiana, Michigan and Ohio. Average backlog has returned to levels above 6 months.

"With investment in power generation and natural resource exploration increasingly taking center stage in the nation’s economic expansion, regions that are more natural resource intensive are likely to experience increases in construction backlog, and eventually in construction spending. This appears to be precisely what is occurring in the South and Middle States,” said Basu. “In contrast, much of the western United States is associated with unemployment and vacancy rates above national averages. Ongoing and serious fiscal issues in a handful of key states also are suppressing nonresidential construction recovery in much of the West, explaining at least in part the sluggish nature of the construction recovery there to date.”

"The fourth quarter 2010 data shows that the economy is increasingly shifting toward private sector momentum and away from public sector dependence. Though the recovery remains well short of two years in duration, its positive impact on construction is becoming increasingly apparent,” Basu said. “Unfortunately, the outlook is not as bright for contractors that primarily work in the infrastructure segment. As federal stimulus-financed projects wind toward their inevitable conclusion, the expectation is that construction backlog in this category is likely to fall, bolstered by ongoing issues in state and local government finances, which hamstring capital spending."

"As recovery in the broader economy and nonresidential construction sector proceed, smaller firms are likely to begin to experience larger construction backlogs. This is the firm size category that stands to benefit the most from the shift toward private sector-led expansion,” said Basu. “In comparison, firms with annual revenues in excess of $100 million a year are diversified to the point that their construction backlog will improve regardless of either public or private sector expansion."