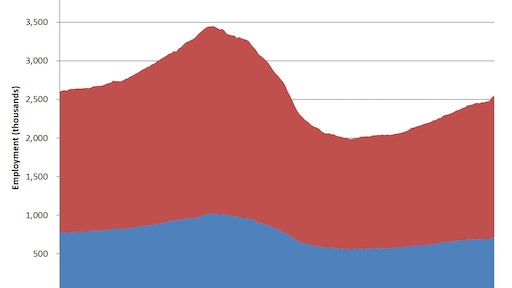 The count of unfilled jobs in the overall construction sector increased significantly in December, even as hiring in the home building sector has grown.

According to the BLS Job Openings and Labor Turnover Survey (JOLTS) and National Association of Home Builder (NAHB) analysis, the number of open construction sector jobs (on a seasonally adjusted basis) increased to 207,000 in December from 138,000 in November — that's a jump of 69,000 job openings. The December estimate solidly beats the previous cycle high of 168,000 open positions set during March (39,000 less than December) and represents the highest count of job openings since early 2007.

On a three-month moving average basis, the open position rate (job openings as a percent of total employment) for the construction sector increased to 2.3% for December. The overall trend for open construction jobs has been an increasing since the end of the Great Recession. This is consistent with survey data indicating that access to labor remains a top business challenge for builders.

The construction sector hiring rate, as measured on a three-month moving average basis, held steady at 5%, remaining near rates set in the spring of 2015. The quits rate for construction increased to 2.2% for December, the highest rate since December 2014.

Monthly employment data for January 2016 (the employment count data from the BLS establishment survey are published one month ahead of the JOLTS data) indicate that home builders and remodelers increased hiring significantly on a seasonally adjusted basis in recent months. Total residential construction employment grew by 20,100 for January, after a pickup of  28,000 in December and 44,900 for November. The November gain was the largest single increase during the post-recession period.

The pace of hiring for the residential construction industry had been slowing over the course of 2015. With the recent jumps however, the six-month average of monthly employment growth is now a robust 18,000.

Over the last 12 months home builders and remodelers have added 150,000 jobs on a net basis. Since the low point of industry employment following the Great Recession, residential construction has gained 585,300 positions.

For the economy as a whole, the December JOLTS data indicate that the hiring rate held steady at 3.7% of total employment. The overall open job rate increased to 3.8%, equal to the cycle high set during July.