According to ABC analysis, construction added 45,000 net new jobs in December and 128,000 during the fourth quarter 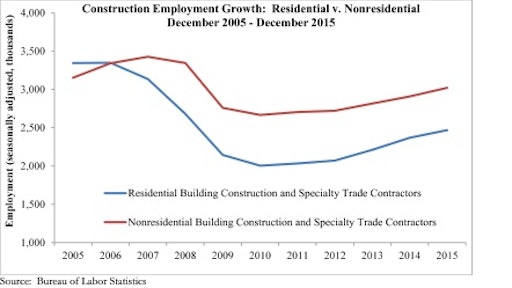 The U.S. construction industry showed robust growth at the end of 2015, adding 45,000 net new jobs in December and 128,000 during the fourth quarter according to analysis of today's employment release from the U.S. Bureau of Labor Statistics by Associated Builders and Contractors (ABC). The construction industry's nonresidential component added 16,400 net new jobs in December while the residential sector accounted for 23,100 and the heavy and civil engineering sector contributed 4,800.

"Many contractors continue to report strong backlog, indicating that nonresidential construction spending will remain a key economic driver in 2016," said ABC Chief Economist Anirban Basu. "Given the mounting level of concern regarding the U.S. economic outlook in the face of emerging global deflationary forces and unstable geopolitics, today's employment report is a positive sign. Consumer spending will be the primary economic driver in 2016 and the U.S. economy would fail to achieve even 2 percent growth should the labor market begin to sputter."

November's construction employment estimate was upwardly revised from 46,000 net new jobs to 48,000, but the construction unemployment rate rose to 7.5% in December from 6.2% in both November and October.

"The construction industry's unemployment rate surged 1.3 percentage points in December, an indication that more people are beginning to recognize the opportunities being generated by the industry and want to participate in what is presently one of the economy's more dynamic segments," said Basu. "While rising unemployment is not generally viewed as a good thing, it could signal relief in an industry where contractors have fretted for years about a lack of qualified craftspeople to do the work."

Due to the ongoing pandemic, AED will hold its annual event May 24-26 in Las Vegas, while offering a virtual option to accommodate member needs.
Associated Equipment Distributors
January 8, 2021
Follow Us