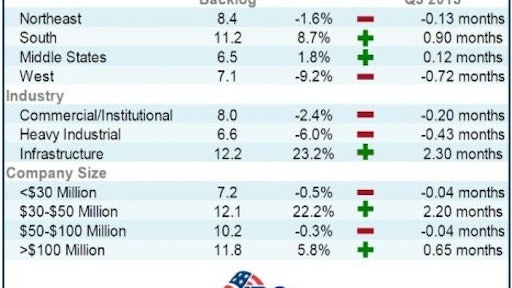 The South posted the highest backlog in the history of the Construction Backlog Indicator (CBI) in the fourth quarter of 2015, according to Associated Builders and Contractors (ABC).

Nationally, backlog expanded by 2.7% to 8.7 months in the last three months of the year, with the South expanding on its previous record high reading by 8.7% to 11.19 months. In addition, infrastructure-related backlog expanded by 23.2% in the fourth quarter to 12.2 months.

"For the first time in years, some contractors are reporting that they are turning away work," said ABC Chief Economist Anirban Basu. "Skill worker shortages are a frequently cited reason. The recent uptick in backlog suggests that demand for construction workers will remain elevated going forward, which will translate into faster wage growth, but also potentially rising costs and extended timelines.

"The nonresidential construction recovery remains very much in place," said Basu. "Despite disappointing news regarding global growth and corporate earnings, most contractors reported steady to rising backlog during 2015's final weeks. That's important to contractors, of course, but also to other economic stakeholders, since nonresidential construction spending growth has emerged as one of the nation's leading economic drivers.

Backlog in the West slipped during the year's initial quarter. There has been much speculation regarding excessively high technology company valuations. Many tech companies have expanded their physical capacity in recent years, and evidence suggests that this pace of expansion may have slowed somewhat. Still, backlog in the West remains above its level in the first half of 2015.

To read more about the latest CBI, click here.