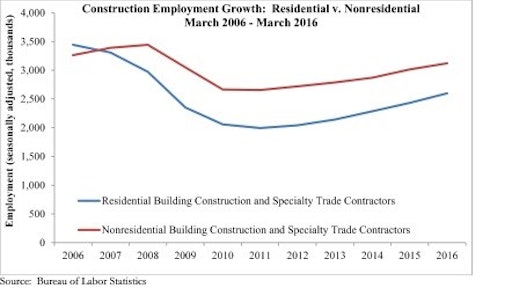 "The headline job growth number tells us that construction remains one of the U.S. economy's leading economic drivers," said ABC's Chief Economist Anirban Basu. "While the broader economic recovery remains in place, construction accounts for a disproportionate share of that recovery. Many other aspects of the recovery remain at least somewhat unsatisfying, including surprisingly soft wage growth, weak corporate profits and sluggishness in business investment. However, demand for labor remains high, including in a number of key nonresidential construction segments.

The construction industry unemployment rate remained unchanged at 8.7% in March, but remains almost a full percentage point lower than at the same time one year ago. The unemployment rate across all industries rose by a tenth of a percentage point in March and now stands at 5%. This slight uptick is largely attributable to the 396,000 people who entered the labor force in March, a positive indication for the durability of the expansion.

The heavy and civil engineering construction segment gained 11,200 jobs in March and is up by 27,500 positions or 3% on a year-over-year basis