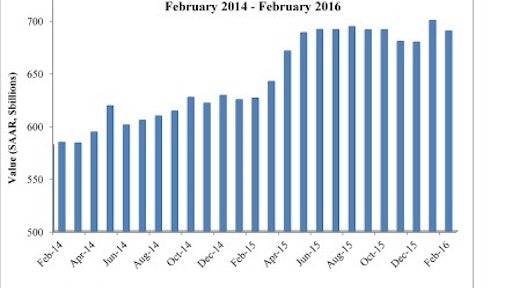 Nonresidential construction spending dipped in February, falling 1.4% on a monthly basis according to analysis of U.S. Census Bureau data released today by Associated Builders and Contractors (ABC). Spending in the nonresidential sector totaled $690.3 billion on a seasonally adjusted, annualized basis in February. While this represents a step back from January's figure of $700.3 billion (revised down from $701.9 billion), it is still 1.5% higher than the level of spending registered in December 2015 and 10.1% higher than February 2015.

"February's weather was particularly harsh in certain parts of the country, including in the economic activity-rich Mid-Atlantic region, and that appears to have had an undue effect on construction spending data," said ABC Chief Economist Anirban Basu.  "February data are always difficult to interpret, and the latest nonresidential construction spending figures are no different. Seasonal factors have also made state-level data very difficult to interpret.

"Beyond meteorological considerations, there are other reasons not to be alarmed by February's decline in nonresidential construction spending," said Basu. "Today's positive construction employment report indicates continued economic growth. Moreover, much of the decline in volume was attributable to manufacturing, but the ISM manufacturing index recently crossed the threshold 50 level, indicating that domestic manufacturing is now expanding for the first time in seven months."

Eight of the sixteen nonresidential subsectors experienced spending decreases in February, though almost half of the total decline in spending is attributable to the 5.9% decline in manufacturing-related spending.

Spending in eight of the nonresidential construction subsectors fell in February on a monthly basis:

Spending in the power category fell 0.6% from January, but is 4.8% higher than one year ago.