Construction input prices fell by 0.6% during January 2016; have now decreased on a year-over-year basis for 14 consecutive months 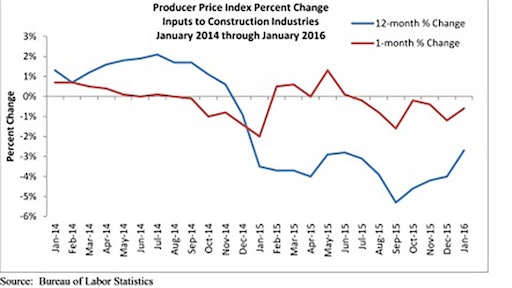 "While it is possible that prices will begin to rise, increases are likely to be gradual absent some coordinated action by producers to limit supply. Falling input prices certainly carry positives, but there are also large risks involved," said ABC Chief Economist Anirban Basu.

The implication is that global deflationary forces have now been in place for well over a year, which has translated into growing volatility in many regional economies and in financial markets. Prices for inputs to nonresidential construction have behaved similarly, falling 0.8% on a monthly basis and 2.7% on an annual basis. Inputs related to energy — crude petroleum, natural gas and unprocessed energy materials — plummeted again in January, contributing heavily to overall construction input price declines.

“With Russia and Brazil remaining in recession and with the Chinese economy continuing to slow, input prices are likely to remain low for quite some time,” said Basu. “While it is possible that prices will begin to rise, increases are likely to be gradual absent some coordinated action by producers to limit supply. Falling input prices certainly carry positives, but there are also large risks involved. Corporate bond defaults are up, particularly in the U.S. energy sector. Job losses continue among energy workers and several states are already in recession. These factors alone are unlikely to drive the economy into recession, but rising defaults could make capital more difficult to access going forward, which could limit construction starts.”