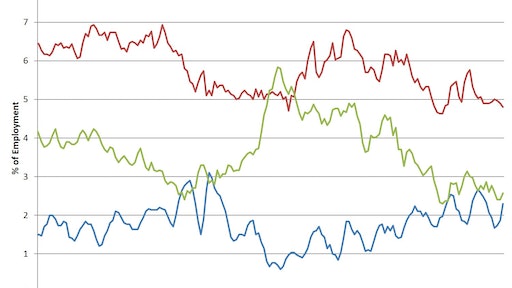 The count of unfilled jobs in the overall construction sector reached a post-Great Recession high in February.

According to the BLS Job Openings and Labor Turnover Survey (JOLTS) and National Association of Home Builders (NAHB) analysis, the number of open construction sector jobs (on a seasonally adjusted basis) increased to 193,000 in February from a downwardly revised estimate of 157,000 in January. The current estimate beat the previous cycle high of 177,000 unfilled positions set last May by 16,000 jobs and represents the highest monthly count of job openings since July 2007.

The overall trend for open construction jobs has been an increasing since the end of the Great Recession. This is consistent with survey data indicating that access to labor remains a top business challenge for builders.

The construction sector hiring rate, as measured on a three-month moving average basis, dipped to 4.8%, although remaining near rates set in the spring of 2015. The quits rate for construction rose to 1.5% for February.

Monthly employment data for March 2016 (the employment count data from the BLS establishment survey are published one month ahead of the JOLTS data) indicate that home builders and remodelers increased hiring on a seasonally adjusted basis in recent months. Total residential construction employment grew by 13,400 in March.

The pace of hiring for the residential construction industry had been slowing over the course of 2015. With the recent acceleration however, the six-month average of monthly employment growth is now a robust 21,200.

Over the last 12 months home builders and remodelers have added 166,000 jobs on a net basis. Since the low point of industry employment following the Great Recession, residential construction has gained 612,000 positions.

For the economy as a whole, the February JOLTS data indicate that the hiring rate rose to slightly 3.8% of total employment. The overall open job rate ticked down to 3.7%, although remains near the cycle high last set during January.

If you’re unable to stop criminals from getting onto your jobsite, the next best thing you can do is put roadblocks in place to slow them down in the act.
Pro-Vigil
May 4, 2021
Follow Us