69% of Americans Support User Fees to Pay for Roads 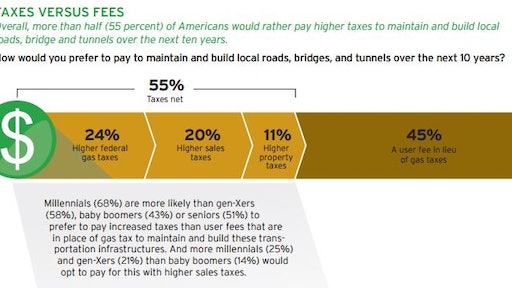 Nearly 160 million Americans (65%) would support the use of road-usage fee options such as vehicle miles traveled or mileage-based user fees to help fund transportation costs, according to a new America THINKS national public opinion survey by HNTB Corporation. It’s a significant increase in favorability compared to a similar survey conducted in 2014, when 50% of respondents said they would support user fees.

“The growing recognition that new ways are needed to pay the costs of maintaining and building our transportation infrastructure shows Americans understand the fundamental shifts in funding infrastructure are happening,” said Matthew Click, AICP, HNTB national director of priced managed lanes and vice president. “More and more people realize that road-usage fees options, such as vehicle miles traveled or price managed lanes, are needed to fill the gaps resulting from declining ability of federal gas taxes to provide needed funds.”

The survey’s findings show that more than half (55%) of Americans believe funding to maintain and build the nation’s infrastructure of local roads bridges and tunnels over the next ten years should come from increased taxes, including gas taxes (24%), sales taxes (20%) and property taxes (11%) versus user fees (45%).

Similarly, for the funding of maintenance, additional lanes and safety improvements for the nation’s interstate highways, 56% of Americans would prefer increased taxes, such as federal gas (28%), sales (17%), or property (10%) taxes, over user fees.

The America THINKS survey identifies the emergence of significant generational differences in how infrastructure should be funded over the next ten years. For local infrastructure needs, 68% of millennials (18 to 34 years old) prefer increased taxes to user fees in lieu of gas taxes, compared to 58% of generation X-ers (ages 35 to 49), 43% of baby boomers (ages 50 to 68) or 51% of seniors (ages 69 and older).

Another generational difference emerges on the desirability of user fees, such as vehicle miles traveled or mileage-based user fees.  Almost four in five Americans (77%) ages 18 to 24 are likely to support these types of fees versus 63% of older Americans. Also, Americans ages 18 to 24 are more likely than their older counterparts (79% versus 67%) to agree that priced managed lanes should be considered when making improvements to the nation’s highways.

“The differences among younger Americans from their older counterparts in how to fund infrastructure is likely a reflection of their increased reliance on public transit over private automobiles, and a lower rate of home ownership than older Americans,” said Click.

The America THINKS survey found that 67% of Americans who plan to buy or lease a vehicle see that availability and affordability of connected vehicle technologies would be important in their next vehicle, with 26% who feel this is very important.  And close to three-quarters (73%) of 18 to 49 year olds agree that this technology is important versus 58% of older Americans.

According to the survey, 30% of Americans think the most valuable feature of public transportation is that it reduces traffic congestion due to less vehicles being on the road. Again, generational differences emerge, with more baby boomers and seniors than millennials and generation X-ers (38% versus 25%) agreeing that reduced congestion is the best benefit of public transportation.

Also, 31% of Americans believe the best way to reduce congestion on roadways is by providing more public transportation choices, with more Americans ages 50 to 68 than those aged 18 to 49 (36% versus 28%) in agreement.