Nonresidential construction sector was the shining spot with 6,600 net new jobs for the month while residential specialty trade contractors lost 10,900 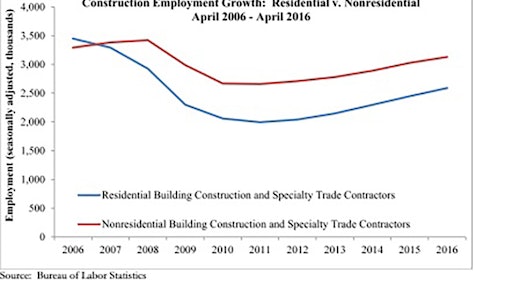 The U.S. construction industry added just 1,000 net new jobs in April according to an Associated Builders and Contractors (ABC) analysis of U.S. Bureau of Labor Statistics (BLS) release. Although industry-wide job growth was marginal, the nonresidential construction sector added 6,600 net new jobs for the month. Revisions to the previous two months of construction data produced a net decrease of 3,000 jobs, with March's construction employment estimate raised by 4,000 jobs but February's downgraded by 7,000 positions.

"There has been a significant volume of data indicating that residential construction has been slowing, including today's report," said ABC chief economist Anirban Basu. "This may be due in part to growing concerns in various parts of the nation that the multifamily rental market is on its way to being overbuilt.

"For now, increased spending on hotels, office buildings, data centers and warehouses related to e-commerce is helping support nonresidential job creation," said Basu. "The bigger issue for contractors is not excess labor but difficulty locating appropriately skilled labor. The construction industry's unemployment rate is down to 6%. This represents the largest month-over-month decrease in the unemployment rate since April 2005. Firms are responding by offering more hours to current workers. The average workweek expanded by four-tenths of an hour in April to 39.1 hours per week, and average weekly earnings rose by nearly $14."

According to BLS's estimates, residential specialty trade contractors took the brunt of the hit, losing 10,900 positions for the month. The heavy and civil engineering sector lost 2,200 positions. Despite this, the nation's nonresidential construction sector added 6,600 net new jobs in April.