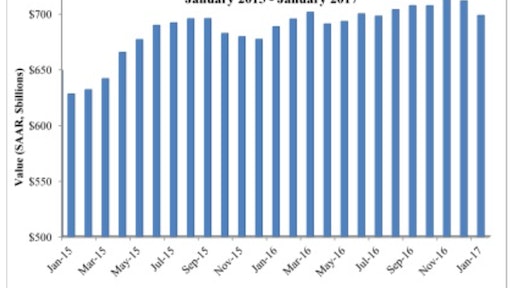 “The new president’s speech on Tuesday night discussed the need for additional infrastructure investment,” said Basu. “If the president is able to implement his public-private partnership plan, public construction spending is set to soar. However, there are many obstacles to his plan coming to fruition.

“Private construction spending was also soft in January, but the outlook remains upbeat,” said Basu. “Corporate confidence is high, architects became much busier during the period immediately following the presidential election, and capital from banks and other sources should be broadly available to developers during the year ahead.”