New York is almost 50% more expensive in construction costs than the national average in the U.S., and more than 20% higher than other major cities 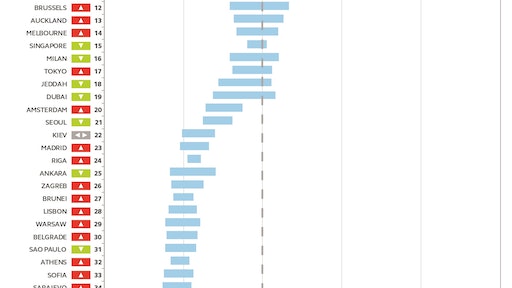 The 2017 edition of the annual International Construction Costs report details the relative cost of building in 44 of the world’s major cities across 13 building types, while outlining the signiﬁcant product quality, supply chain and cost differential factors.

New York is the world’s most expensive city to build in, according to the latest International Construction Costs report published by Arcadis, a leading global design and consultancy firm for natural and built assets. The high density Asian cities of Hong Kong, in second, and Macau, fifth, rank in the top five, along with Geneva, third, and London, fourth.

London has fallen two places since last year, largely due to the devaluation of the pound following the UK’s Brexit vote making it less expensive compared to other cities. Shanghai, in 35th, and Manilla, 38th, suffer the biggest decreases overall, both dropping eight places. The highest climbers in the ranking of 44 cities are Auckland, which is up to 13th, Belgrade up to 30th, and Taipei, 40th, all of which rose four places compared to 2016.

“New York rises to the top globally once again due to a lack of real estate availability, accessibility issues and high real estate prices,” says David Hudd, Arcadis Cost and Commercial Director. “To build in such a dense urban environment like NYC, you must find solutions to control costs, such as expertly handling storage, transport and staging of building materials, identifying skilled construction firms and labor far in advance, and implementing modularized construction.”

New York construction shows no signs of slowing down

U.S. construction output growth is expected to increase at around 3% per year, driven by the housing market, the recovery of large metropolitan areas and the continued investment in manufacturing as the pace of reintroducing domestic manufacturing accelerates, especially in light of proposals of the new U.S. administration. Housing continues to be a bright sector but with build rates remaining 30% below the pre-crisis peak, there should be potential for further growth.

The 2017 edition of the annual International Construction Costs report details the relative cost of building in 44 of the world’s major cities across 13 building types, while outlining the signiﬁcant product quality, supply chain and cost differential factors.

The top 10 most expensive cities to build in are: