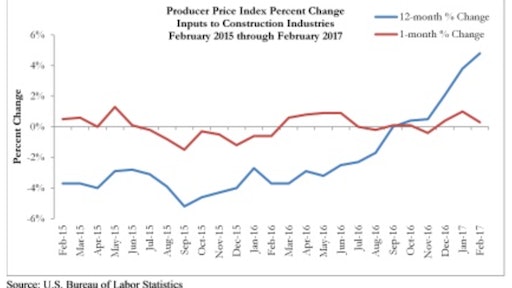 “There is growing evidence of inflationary pressures throughout the economy, and construction materials prices are no exception,” said ABC Chief Economic Anirban Basu. “After declining during the latter half of 2014 and throughout 2015, global commodity prices have begun to stabilize. There are many reasons for this, including a somewhat more stable global economy, decisions by producers to reduce supply, general increases in asset prices and expansionary monetary policy in much of the advanced world.

“Still, contractors should not worry excessively about prospects for massive additional increases in materials prices,” continued Basu. “The global economy is hardly poised to boom given structural factors like demographics and indebtedness. The U.S. dollar has continued to strengthen, which has helped to keep a lid on commodity price increases. Moreover, energy prices have begun to retrench recently, including oil prices, which fell below $50/barrel over the last few days.

“Of course, if the Trump administration is successful in implementing a proposed $1 trillion infrastructure package, dynamics change,” said Basu. “Under those circumstances, concrete and other materials prices stand to rise vigorously.”