Study: Not All Infrastructure is Broken; Targeting Needed to Fix What Is

‘Spreading federal dollars around to fund short-term, shovel-ready projects without a sense of national purpose or priority will not get the nation where it needs to be’ 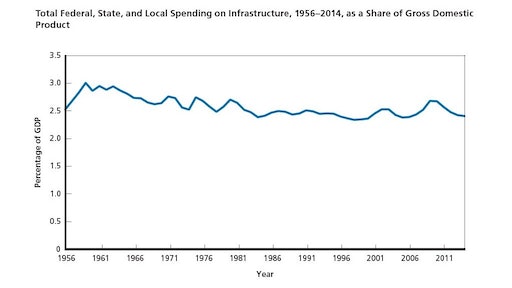 Transportation and water infrastructure funding and finance in the United States are not nearly as dire as some believe, according to a new Rand Corporation study. But a national consensus on infrastructure priorities, accompanied by targeted spending and selected policy changes, is needed.

While much of the nation's transportation and water infrastructure is adequately maintained, a 2.5% to 3% annual spending increase above the total of more than $235 billion now spent annually by local, state, and federal agencies on infrastructure would eliminate most existing maintenance backlogs by 2030, according to researchers.

For more transformational change, a national consensus on capital spending priorities is needed to target regional and national-scale opportunities to meet 21st century needs, while accounting for different priorities across regions and between urban and rural areas, according to the study.

“Spreading federal dollars around to fund short-term, 'shovel-ready' projects without a sense of national purpose or priority will not get the nation where it needs to be,” said Debra Knopman, lead author of the report and a principal researcher at the Rand, a nonprofit research organization. “The federal government should focus on maintaining and modernizing vital federal infrastructure and on targeting nationally significant projects that are beyond the capacity of individual states and cities.”

Federal assistance can be through direct spending or through the tax code. If it wanted to ensure that state and local governments have reliable and sustained access to capital from a broad class of investors, Congress could preserve the federal tax exemption on interest earned from municipal bonds for at least the next decade, reinstate taxable Build America Bonds, and experiment with other financing alternatives that keep capital flowing to local and state infrastructure investment, including investment through public-private partnerships.

Rand researchers also offer other policy options for Congress that could be used to help the federal government—working with state and local governments and the private sector—to renew and modernize the nation's infrastructure.

Among these options, Rand researchers list major investments in the renewal of the nation's most-critical aging and new infrastructure, incorporating advanced technologies to support newer construction methods, more-durable and sustainable materials and sensor technologies that might benefit infrastructure maintenance.

In addition, federal capital funding could include requirements to make projects resilient to natural disasters and climate change in order to reduce future spending on disaster assistance.

The report, “Not Everything Is Broken: The Future of U.S. Transportation and Water Infrastructure Funding and Finance,” is available at www.rand.org. Other authors of the study are Martin Wachs, Benjamin Miller, Scott Davis and Katherine Pfrommer.

Read the Rand Corp. study -- Not Everything is Broken:  The Future of U.S. Transportation and Water Infrastructure Funding and Finance -- for free