Maryland General Contractors to be Liable for Subcontractors' Employee Wages

Courts may award employees up to three times the wages owed, and general contractors are expected to demand subcontractors bond more, longer 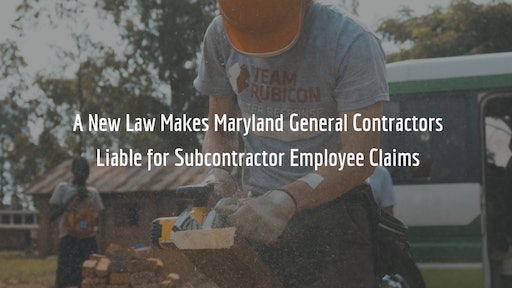 Beginning October 1, 2018, general contractors in Maryland will become liable in instances in which subcontractors have not paid their employees. This change was instituted by Senate Bill 853 which was passed and enacted at the beginning of April.

The effects and consequences of this law for both general contractors and subcontractors are significant and may in the end increase the costs of projects themselves. The law will likely also have an effect on the amounts and duration of the surety bonds required for construction projects.

In particular, the provisions of SB853 include:

This latter condition may make it quite difficult for general contractors to determine the legitimacy of certain claims. General contractors are typically not in possession of the necessary documentation in cases in which claimants are employees of third or fourth tier contractors. This makes room for fraudulent claims to be made.

That, in turn, may mean that general contractors will have stricter requirements towards their subcontractors as well as everyone else down the line.

What's more, since a court may award claimants with as much as three times the wages owed, subcontractors will likely be required to obtain bonds in amounts that will be able to cover high claim amounts. Several analyses of the legislation which have already been published suggest that all of this will likely result in higher costs for construction projects in Maryland. It will also raise the bar for smaller and new contractors and possibly limit their access to projects.

It is suggested that contractors begin preparing for the effective date of the law, given its potentially large-scale effects. What do you think about SB853? What do you think will be its effect on Maryland’s construction industry? Let us know in the comments!

Todd Bryant is the president and founder of Bryant Surety Bonds. He is a surety bonds expert with years of experience in helping contractors get bonded and start their business.