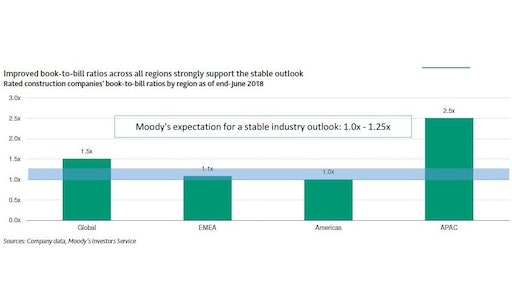 Click here to access Moody's report: "Construction -- Global: Robust economies, higher confidence and low interest rates keep outlook stable" The report is also available at www.moodys.com. The rating agency's report is an update to the markets and does not constitute a rating action.

"Continued strong economic growth in a number of major developed and emerging markets coupled with attractive financing conditions on the back of very low interest rates will boost average global construction industry revenues by 5% into 2019, keeping our outlook on the sector stable," says Goetz Grossmann, Assistant Vice President -- Analyst at Moody's.

An average book-to-bill ratio for the global construction sector forecast at 1.2x also reflects the current healthy industry conditions and suggests sustained revenue growth during 2019 and beyond.

Asia Pacific and North America will see the fastest surge in revenues (up to 10% and 6%, respectively). China revenues will advance by 8% or more as demand remains strong, mainly in the country's transport infrastructure segment. In the US and Canada, still healthy residential and a pickup in commercial construction activity will drive volumes.

Europe's healthy order books will underpin mid-single-digit revenue growth in the region, bolstered by improved construction industry confidence and budgetary conditions in several countries, which bode well for residential and public infrastructure spending. In the UK, political and economic uncertainty as well as fragile business confidence due to the ongoing Brexit negotiations will stifle construction output.

The new standard seeks to protect healthcare workers while allowing other industries, including construction, to set protocols specific to their workplaces.
Becky Schultz
Jun 11th, 2021

Vote June 8 on amendments to a package of bills designed to invest in US competitiveness with China ensures support not just for semiconductor manufacturers, but workers that drive their productivity
Larry Stewart
Jun 9th, 2021

The VPL will be the first facility in North America to allow comprehensive testing of current and future products for Volvo and Mack Trucks.
Volvo Group
Jun 9th, 2021

How to optimize virtual meetings to make them most effective.
Caterpillar - Cat
Jun 9th, 2021

Construction 365 offers a complete view of construction projects by unifying data from the back office to the jobsite and across the project lifecycle.
InEight
Jun 9th, 2021

The Federal Trade Commission is reporting that the merger between the two cement producers has been abandoned.
Lehigh Hanson
Jun 8th, 2021

The Dodge Momentum Index moved 9.1% higher in May largely due to the strongest month-over-month gain in commercial planning since October 2017.
Dodge Data & Analytics
Jun 8th, 2021

The construction industry is on-trend to grow 4.2% by 2023. In order to do so, it needs to find solutions to increase productivity and complex business operations.
ProjectPro
Jun 8th, 2021

Dodge Data & Analytics forecasts construction starts to rebound in 2021 and 2022, with the prospect of far greater gains if even a projected $550 billion “middle of the road” infrastructure spending plan is passed.
Becky Schultz
Jun 7th, 2021