Opponents leaned heavily on an initial study that predicted the increase to $15 would cost workers jobs and hours. That didn’t happen. 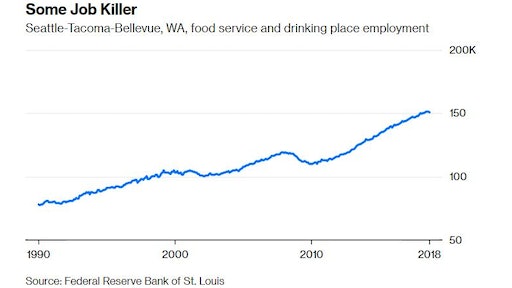 In a new paper, the authors behind an earlier study predicting dire consequences for raising Seattle’s minimum wage to $15 have all but recanted their initial conclusions.

Like some other thriving West Coast cities, a few years ago Seattle passed an ordinance raising the minimum wage to $15 an hour in a series of steps.

A Bloomberg.com op-ed piece points out that opponents of the minimum-wage increase called it an “economic death wish” that was going to tank the expansion and kill jobs. They predicted restaurants would close in significant numbers and unemployment to rise.

Data from the Federal Reserve Bank of St. Louis (see chart) shows that the rate of employment growth in the Seattle metro area has not changed.

Biden Admin. focus on small businesses assures that sole proprietors and businesses with fewer than 20 employees have a great shot at getting a first or second forgivable PPP loan
Larry Stewart
Feb 25th, 2021

CPWR offers suggestions to improve ventilation, and cut COVID-19 exposure risks, on enclosed construction sites where HVAC systems are not in operation.
CPWR -- The Center for Construction Research and Training
Feb 19th, 2021