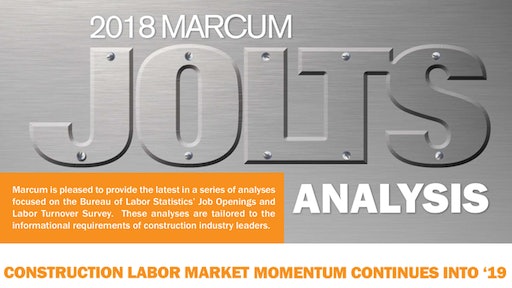 Marcum LLP released its annual analysis of construction industry job trends for 2018, based on the Bureau of Labor Statistics’ Job Openings and Labor Turnover Survey (JOLTS). Produced by the national accounting firm’s Construction Services Group, the 2018 Marcum JOLTS Analysis reports that construction was a bright spot in the national labor market, despite financial turmoil, recessionary expectations and a government shutdown in the fourth quarter of last year.

Between January 2018 and January 2019, construction accounted for 12.5% or 338,000 of the total 2.7 million net new jobs created year-over-year.  That ratio edged even higher on a monthly basis in the early weeks of 2019, with construction adding more than 17% of all net new positions in January.

“In January, the nation added another 304,000 net new jobs, blowing through a consensus estimate of around 170,000 new positions. Construction was one of the big winners, single-handedly adding 52,000 net new jobs. Industry unemployment stood at 6.5% in January, a bit lower than it was a year earlier,” wrote Anirban Basu, Marcum’s chief construction economist and author of the report.

The rapid start to the new year followed on the heels of a strong December, when construction added the most to the sum total of available job openings of any industry. In the final month of 2018, the sector added another 88,000 available, unfilled jobs, implying that filling available positions will become even more challenging in 2019.

Basu noted that while the number of job openings in construction has surged, the number of net hires has not changed, “a reflection of the growing difficulty contractors are having filling the expanding number of open positions.”

“Interestingly, despite significant job creation, the nation’s construction unemployment rate ballooned from 4.5% in October to 7.8% in February. Much of this increase is seasonal, but there is some anecdotal evidence suggesting that it is at least partially due to renewed confidence among job-seekers in construction’s capacity to generate stable employment…The data are consistent with the notion that some of these workers are returning to construction,” Basu said.

The report concludes that the current economic outlook is benign and points to the persistent low interest rates that have sustained economic momentum. “Were the inflation numbers to heat up, interest rates would be induced higher. With so much [corporate and consumer] debt on the books, the impact on debt service could be enough to both rock asset prices and to induce a softening of consumption and investment,” Basu wrote.  “But for now, the JOLTS numbers tell us that recession is not imminent and that employment growth stands to be an element of our collective future during 2019’s initial half.”