Federal and state funds pledge $100 million to elevate 6.5 miles of roadway in the east, allowing water flow into the park to more closely mimic natural conditions 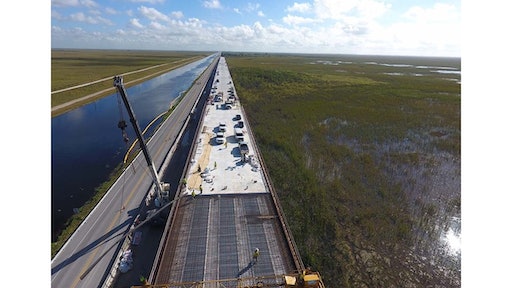 Elevating the lowest portions of the U.S. Highway 41 roadway in the east will allow raising fresh water levels entering the Everglades a foot.
National Park Service

The Federal Highway Administration (FHWA) will grant $60 million to Everglades National Park through the Nationally Significant Federal Lands and Tribal Projects program to complete the Tamiami Trail Next Steps project.

This federal highway funding will match a $43.5 million commitment announced last November by then Governor Rick Scott, and subsequently fully supported by Governor DeSantis and the Florida legislature.

The combined $100 million federal and state funding will complete the Next Steps, which will elevate the remaining 6.5 miles of the eastern Tamiami Trail roadway, which has been on grade since 1928, to allow water to flow into the park. The park has been deprived of its fresh water for many decades and this project will allow water managers to significantly increase water flows rehydrating the 1.5 million acres of park lands, including Florida Bay.

“Projects like this one are made possible by the full cooperation and collaboration between federal and state agencies. We are very fortunate to have the strong support from our partners in the State of Florida, as well as many members of the Florida delegation who have supported this project from the beginning,” said Everglades National Park Superintendent Pedro Ramos.

The National Park Service, FHWA, and the Florida Department of Transportation will begin preliminary design of the final phase of the Next Steps project this month. FDOT is expected to issue the design/build contract by the middle of 2020, and full project completion is anticipated by early 2023.

Previous Tamiami Trail (U.S. Highway 41) improvement projects included the one-mile eastern bridge completed in 2014 and the 2.3 miles of western bridges completed in April 2019. This project will once and for all complete 100% of the work required on the Tamiami Trail before water can fully flow from the northern part of the system.

Tamiami Trail, a historic roadway connecting Tampa and Miami, has long been recognized as a barrier that restricts water flows into Everglades National Park. This final Tamiami Trail Next Steps project will work in combination with the Central Everglades Planning Project to enhance the connectivity and sheetflow between the marshes north and south of the Tamiami Trail.

Learn more about the importance of restoring water across Tamiami Trail for Everglades Restoration.

Tolls, Fares and Fee Increases to Add $4.8B in Port Authority Projects