Even with strong job growth the last four months, the U.S. has recovered less than half the jobs lost due to the pandemic. 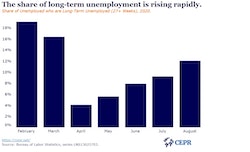 The August employment report showed the economy again adding back jobs at a strong rate. The reported gain of 1,371,000 somewhat overstates underlying strength since it includes the addition of 238,000 temporary Census jobs. However, even without these jobs, the gain would still be over 1.1 million. The unemployment rate dropped 1.8 percentage point to 8.4%, while the employment-to-population ratio (EPOP) rose 1.4 percentage point to 56.5%. (The Bureau of Labor Statistics warns that due to misclassification, the unemployment rate may actually be 0.7 percentage points higher than reported. The size of this error is considerably lower than in April or May, but comparable to its July level.)

By education, the unemployment rate for college grads stands at 5.3%, compared to 9.8% for those with just a high school degree. That compares with year-ago rates of 2.1% and 3.6%, respectively. For those with some college it is 8.0%.

One disturbing part of this picture is a sharp drop in the share of the unemployed who report being on temporary layoff from 56.4% to 45.5%. This is partly due to these workers getting their jobs back, but also due to many layoffs becoming permanent. Still, it is encouraging that close to half of the unemployed expect to be returning to their former jobs.

Job Gains and Losses by Industry

The biggest job gainers by industry were ones that had been hit hard by the shutdowns. Retail added 248,900 jobs, accounting for almost a quarter of the private sector job growth. Employment in the sector is now 655,400 (4.2%) below the February level. Restaurants added 133,600 jobs, but industry employment is still down by almost 2.5 million (20.2%) from the pre-pandemic level.

On the whole, this is a positive report, with the addition of more than 1 million private sector jobs, but we are still down 10.7 million from the February level, having recovered less than half the April job loss. With momentum clearly slowing and large public sector layoffs looming, it is difficult to be too optimistic.