Phoenix and Las Vegas home prices are still 50% and 60% below their 2006 peaks, and the national average price is about 33% below peak 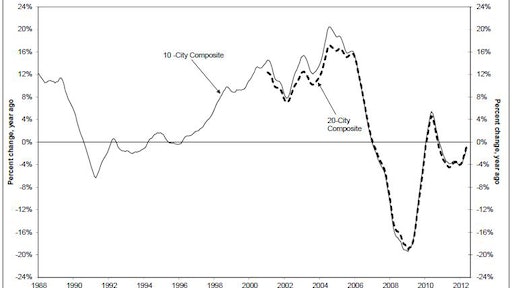 Both Composites and 17 of the 20 metro areas saw increases in annual returns in May compared to April. Boston, Charlotte and Detroit saw annual returns worsen in May, with annual rates of -0.1%, +0.9% and +0.6%, respectively. Atlanta continues to be the only city posting a double-digit negative annual return with -14.5%. However, this is an improvement over the -17.0% annual decline recorded in April. All 20 cities and both composites posted positive monthly returns. No cities posted new lows in May 2012.

“With May’s data, we saw a continuing trend of rising home prices for the spring,” says David M. Blitzer, chairman of the index committee at S&P Dow Jones Indices. “On a monthly basis, all 20 cities and both composites posted positive returns and 17 of those cities saw those rates of change increase compared to what was observed for April. Seventeen of the 20 cities and both composites also saw improved annual rates of return. We have observed two consecutive months of increasing home prices and overall improvements in monthly and annual returns; however, we need to remember that spring and early summer are seasonally strong buying months.

“The 10- and 20-City Composites were each up 2.2% for the month and recorded respective annual rates of decline of 1.0% and 0.7%, compared to May 2011. While still negative, these annual changes are the best we’ve seen in at least 18 months.

“Taking a closer look at the cities, Phoenix again posted the best annual return. Average home prices in that region were up 11.5% versus May 2011. It was one of the hardest hit cities in the collapse, and prices are still more than 50% below their June 2006 peak, but the past five months have been positive for that market. Miami and Tampa are two other Sunbelt cities that were hard-hit in the downturn, but are now showing positive annual rates of change.

"Boston, Charlotte and Detroit, on the other hand, saw their annual rates of return deteriorate compared to April, even though prices rose over the month of May," Blitzer added. "Las Vegas posted both a positive monthly change in May and saw an improvement in its annual return; that said, the market is still more than 60% below it August 2006 peak.

“June data for existing home sales, new home sales, housing starts and mortgage default rates were a bit mixed, but all are better than their year-ago levels. The housing market seems to be stabilizing, but we are definitely in a wait-and-see mode for the next few months.”

In May 2012, we observed all 20 MSAs and both Composites posting positive monthly returns. Atlanta, again, was the only city to post a double-digit negative annual rate of return of 14.5%; however it saw improvements in both monthly and annual rates versus what was published for April. Phoenix posted the highest annual rate of growth amongst all 20 cities at +11.5%, an improvement over the +8.6% annual return recorded in April. Chicago fared the best in terms of monthly returns with a 4.5% increase in home prices as compared to April. Atlanta, Cleveland, Detroit and Las Vegas continue to have average home prices below their January 2000 levels.

More than 25 years of history for the S&P/Case-Shiller Home Price Indices is available, and can be accessed in full by going to www.homeprice.standardandpoors.com.

New-Home Sales Decline in June from Upwardly Revised May Pace