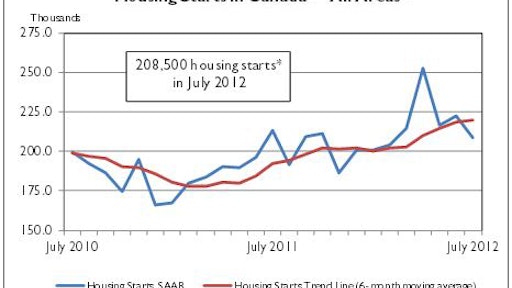 For the first time in seven months, housing starts in Canada in July were below the trend estimate.

"For the first time in seven months, the July monthly SAAR estimate was below the trend estimate,” said Mathieu Laberge, Deputy Chief Economist at Canada Mortgage and Housing Corp.'s (CMHC) Market Analysis Centre. "The bulk of the July decrease was in the multiples segment (multi-family housing) in British Columbia."

For some markets, CMHC uses the trend measure as a complement to the monthly SAAR of housing starts to account for considerable swings in monthly estimates and obtain a more complete picture of the state of the housing market. In some situations, analyzing only SAAR data can be misleading in some markets, as they are largely driven by the multiples segment of the markets which can be quite volatile from one month to the next.

Rural starts were estimated at a seasonally adjusted annual rate of 21,200 units in July.

Canadian Housing Market to Moderate into 2013