Residential and non-residential building intentions declined most in Ontario, with Saskatchewan a distant second 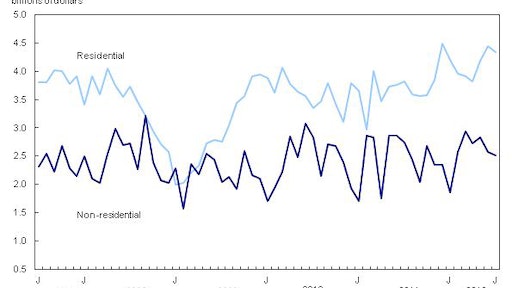 Canadian municipalities issued building permits worth just over $6.8 billion in July, down 2.3% for the month but 4.5% better than July 2011. The main factor in the monthly decline was lower construction intentions for both residential and non-residential buildings, particularly in Ontario.

In the residential sector, the value of permits decreased 2.4% to $4.3 billion, following two consecutive monthly advances. The decline was attributable mainly to lower construction intentions in four provinces, led by Ontario, with Saskatchewan a distant second. Canadian residential permit values were 13.6% construction is

In the non-residential sector, the value of permits fell 2.1% to $2.5 billion after a 9.0% decrease in June. Non-residential permits declined in six provinces with Ontario and Saskatchewan accounting for most of the drop. Aggregate nonresidential permit value is 8.2% below July 2011 levels.

Both multi- and single-family down

The value of permits for multi-family dwellings decreased 4.3% to $1.9 billion, following two consecutive monthly increases. Construction intentions were down in seven provinces, with Ontario posting the largest decline, followed by Saskatchewan and Alberta. The value of multi-family permits increased in British Columbia, Nova Scotia and Prince Edward Island.

Institutional and industrial construction down

In July, the value of permits for non-residential construction decreased for the second consecutive month. Declines in the institutional and industrial components more than offset gains in the commercial component.

In the institutional component, the value of permits fell 25.2% to $404 million, the second consecutive monthly decline and the lowest level since February 2012. The decrease was mainly the result of lower construction intentions for educational institutions in Ontario and British Columbia and government buildings in Saskatchewan and Alberta.

The value of permits for industrial buildings decreased 3.7% to $462 million, following a 0.5% advance in June. The decline was mostly the result of lower construction intentions for manufacturing plants in Ontario, the value of which had increased the previous month.

In the commercial component, the value of permits rose 6.4% to $1.7 billion, the fifth monthly increase since the beginning of the year. The advance was largely a result of higher construction intentions for a variety of commercial buildings. These included retail outlets and theatre and performing art centres in British Columbia, and recreational facilities in Newfoundland and Labrador, Saskatchewan and New Brunswick.

In July, the total value of permits declined in six provinces, led by Ontario, followed by Saskatchewan and Alberta.

In Quebec, the value of permits for industrial and institutional buildings was behind the increase, while in New Brunswick, gains were reported in institutional and commercial buildings, and single-family dwellings.

Most metro areas down

The total value of permits fell in 24 of the 34 census metropolitan areas.

Links to permit data by province and metro area

Canadian Housing Market to Moderate into 2013