Nonresidential construction spending fell 1.3% for the month but is up 2.2% year over year 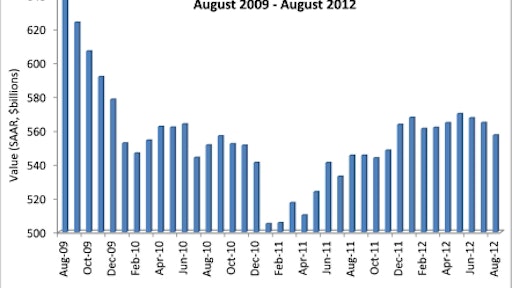 Construction spending has fallen for the second consecutive month, dipping 0.6% in August 2012.

Construction spending has fallen for the second consecutive month, dipping 0.6 percent in August, according to the U.S. Census Bureau. However, spending is up 6.5 percent from one year ago.

Construction subsectors posting the largest monthly decreases in spending include:

The largest year-over-year decreases in spending were experienced in:

Only three of 16 nonresidential construction subsectors posted increases in spending for the month, including:

Eight subsectors have registered increases in spending on a year-over-year basis, including:

Residential construction spending increased 0.9 percent for the month and is 16.1 percent higher than August 2011.

“While plenty of financial capital is potentially available to move construction projects forward, there remains a lack of capital willing to invest itself in risky economic endeavors,” Basu said. “The reluctance to invest in construction has been growing as the nation moves closer to falling off its fiscal cliff. Since near-term resolution is unlikely, the expectation is that the next few months also will be soft.

"The ongoing declines in private construction are especially important in the context of constraints on public construction,” Basu said. “State and local government budgets continue to wrestle with the aftermath of the Great Recession, as well as with issues pertaining to underfunded pensions and federal mandates.