While total construction spending slipped in July 2012, year-over-year spending is up 9.3% 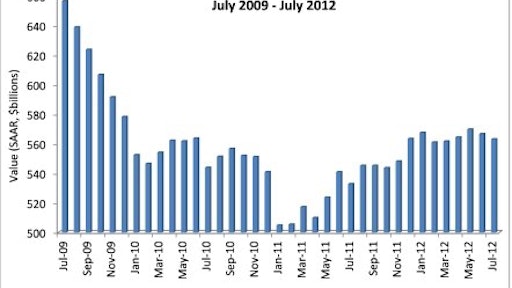 Further signaling a lackluster national economy, construction spending – which includes both nonresidential and residential building – decreased 0.9 percent in July but is up 9.3 percent year over year, according to the September 4 report by the U.S. Census Bureau.

Only five of 16 nonresidential construction subsectors posted increases in spending for the month.

Nine construction subsectors registered double-digit percentage increases from one year ago including:

In contrast, residential construction spending fell 1.6 percent for the month but remains 17.6 percent higher than the same time last year.

“There are many explanations for this, including the sharp reduction in the overall rate of economic growth since the final quarter of 2011,” said Basu. “Businesses appear to be more hesitant to push construction projects forward given the nation’s approaching fiscal cliff, the November elections, uncertainty in Europe, higher energy prices, and the slowdown in job growth recorded during much of the summer.

“The good news is much of this uncertainty may dissipate during the next several months, setting the stage for improved private construction spending next year,” Basu said. “For now, the U.S. economy and nonresidential construction sector appear to be in a holding pattern.

“With the economy still expanding and banks appearing a bit more willing to lend, a sharp slowdown in nonresidential construction spending in the near term is improbable, especially if falling off the federal fiscal cliff remains unlikely,” said Basu. “However, the outlook remains roughly flat for private nonresidential construction spending in the United States.”

Construction Unemployment Falls to 11.3% in August 2012

The 2021 Software & Technology Special Report features wisdom and ideas from industry leaders about how to streamline your rental business by maximizing the use of your management system.
Alexis Sheprak
Jul 22nd, 2021

Putting in the time to take care of hard-working rental equipment is essential to keeping the fleet ready to rent at all times. Because, without ready, reliable and safe equipment, there simply is no rental business.
RDO Equipment Co.
Jul 22nd, 2021

Lifts For Artists, created by IronTek Solutions, provides artists and the organizations that hire them with affordable equipment rentals during the production of creative projects and cultural events.
IronTek Solutions
Jul 21st, 2021

Magni Telescopic Handlers will be available for rent and purchase at HOLT Crane & Equipment locations in Houston, Dallas, and San Antonio. In addition, Texas First Rentals has more than 20 locations that will rent and service the Magni equipment line.
Magni America LLC
Jul 21st, 2021

In this episode of Rental's The Bottom Line, Editor Alexis Sheprak talks to Marshall Shaver and Justin Kissinger from Hy-Brid Lifts about June's National Safety Month and the lessons that can come from it.
Hy-Brid Lifts / Custom Equipment LLC
Jul 20th, 2021

Sustainability, digitization, and adopting new technologies are the key to coming back from the COVID-19 pandemic, says presenters at this year’s IPAF Summit, hosted for the first time as a virtual event.
International Powered Access Federation (IPAF)
Jul 19th, 2021

We are in a new place, never going completely back to where we were. What’s missing is a sense of what behaviors have changed for good and which are likely to revert to pre-pandemic norms.
International Powered Access Federation (IPAF)
Jul 18th, 2021

In the digital age, 93 percent of customers say that their buying decisions are influenced by online reviews. And as a small business, your online reputation can directly influence your bottom line.
Pam Haskell
Jul 15th, 2021

Elevating Safety spoke to a group of experienced MEWP training and safety professionals from across the industry to provide the following summary of what constitutes quality training and evaluate its importance.
International Powered Access Federation (IPAF)
Jul 14th, 2021

In this episode of Rental Rundown, Editor Alexis Sheprak sits down with Bart DeHaven, national sales representative for KATO-CES, to talk about The ARA Show 2021.
KATO-CES
Jul 13th, 2021
Follow Us