Construction Unemployment Dips To 11.4% in October 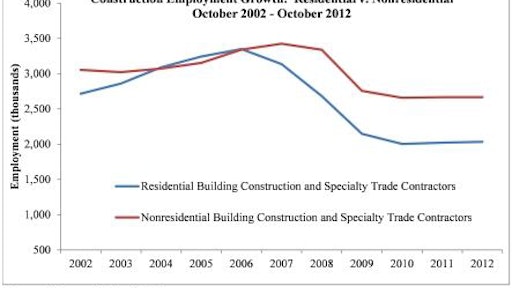 The U.S. construction industry saw a slight increase in the number of jobs last month as the unemployment rate fell to 11.4 percent, down from 11.9 percent in September and 13.7 percent from one year ago, according to the U.S. Labor Department. The industry added 17,000 jobs in October, resulting in five consecutive months of job increases.

Across all industries, the nation added 171,000 jobs as the private sector expanded by 184,000 jobs and the public sector shrunk by 13,000 jobs. Overall, the national unemployment rate increased to 7.9 percent in October, up from 7.8 percent in September.

“The ability of several nonresidential construction segments to add jobs recently is also somewhat unexpected given ongoing concerns regarding the fiscal cliff—a series of tax cuts and spending increases that will take effect at the end of the year,” said Basu. “Most economists agree that if America takes a deep dive off the fiscal cliff, the nation’s economy will be in recession by early next year. That will hardly create an environment for expanding construction activity.

“Still, this momentum may not last,” Basu said. “The economy has struggled to expand above two percent this entire year.

“Heavy and civil engineering construction lost 2,500 jobs last month,” said Basu. “This segment is often viewed as a leading indicator for the entire nonresidential construction industry, and it may be that the owner/developer community is taking a wait-and-see attitude as we approach next week’s elections and the lame duck congressional session to follow.

“All in all, this suggests that the early months of 2013 are likely to be softer from the perspective of nonresidential construction employment growth than the past five months,” Basu said. “But, we’ll have a better idea about the health of the construction industry after ABC’s Construction Backlog Indicator is released later this month.”