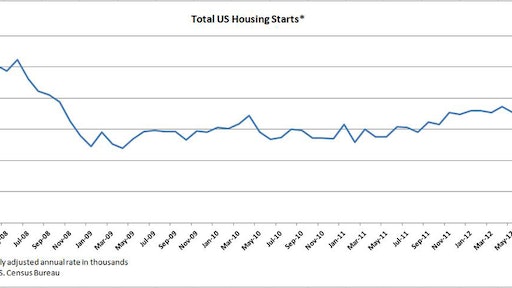 Nationwide housing production rose 3.6 percent in October to a seasonally adjusted annual rate of 894,000 units, according to the U.S. Commerce Department. This is the highest pace of new-home construction since July of 2008.

"This report is in line with our latest builder surveys, which show improving confidence and optimism in the marketplace as buyers take advantage of low mortgage rates and very attractive prices," said Barry Rutenberg, chairman of the National Association of Home Builders (NAHB) and a home builder from Gainesville, Fla. "Builders are acting to meet rising demand while continuing to exercise caution by pulling a modest increase in the number of single family permits as the market continues to gradually gain its footing."

"Today's report bears out similar changes in other economic indicators that housing continues to recover at a slow but steady pace and is right in line with our expectations of modest month-to-month growth," said NAHB Chief Economist David Crowe. "However, we still have a long way to go to get back to normal production as inaccurate appraisals, tight lending conditions for home buyers and policy uncertainties continue to impede the recovery."

Single-family housing starts in October were virtually unchanged at 594,000 units while multifamily production posted an 11.9 percent gain to 300,000 units - the best pace since July of 2008.

Permit issuance, which can be a harbinger of future building activity, fell 2.7 percent to a seasonally adjusted annual rate of 866,000 units in October. The drop in permits was focused in the apartment sector as multifamily permits fell 10.6 percent from an unusually high September level to 304,000 units. Meanwhile single-family permits rose 2.2 percent to 562,000 units.