Single family, multifamily starts and permits all lunge forward; starts only decline in the Northeast 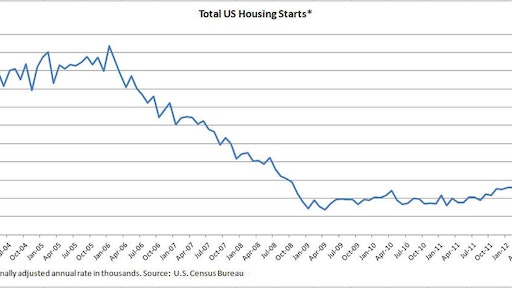 Surging September 2012 housing numbers lifted single-family and multifamily starts, as well as total permits issued to annual rates not seen since fall of 2008.

A 15 percent September surge in new housing starts pushed housing construction to a seasonally adjusted annual rate of 872,000 units, while an 11.6 percent gain brought the pace of permit issuance to 894,000 units. They were the strongest housing numbers since July of 2008.

“Builders are responding to the rising demand for new homes as consumers begin to feel more confident about their local markets and put back into motion purchasing plans that were on hold during the recession,” said Barry Rutenberg, chairman of the National Association of Home Builders (NAHB) and a home builder from Gainesville, Fla. “Yet, while September’s surge in activity is certainly encouraging, we need to remember that we still have a long way to go back to a fully functioning market.”

“Today’s strong report corresponds with the significant gains we’ve seen in builder confidence over the past year, and confirms our view that a housing recovery is solidly underway in a growing number of markets nationwide,” added NAHB Chief Economist David Crowe. “That said, we are now almost at the half-way mark in terms of what would be considered a normal amount of new-home construction in a healthy economy, and we need to see consistent improvement like this over an extended period to get back to where the market should be in terms of generating jobs and economic growth.”

Combined single- and multifamily starts rose in all but one region of the country in September, with:

New building-permits issued, which can be an indicator of future building activity, also registered significant gains; the highest permit numbers since July 2008.

Regionally, permit issuance rose across the board in September, with: