Materials prices fall 1.1% in November 2012 but are still 1% higher than the same time last year 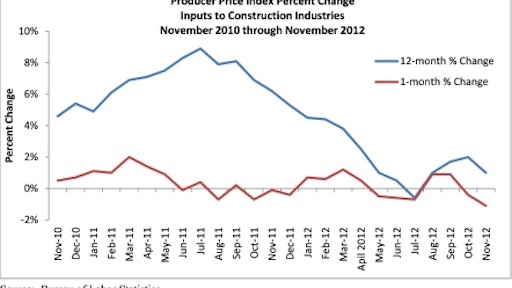 In a sign of a weak global economy, the nation’s construction materials prices fell 1.1 percent in November - the largest monthly decrease since February 2009 - according to the producer price index report by the U.S. Department of Labor. However, prices are 1 percent higher than the same time last year.

Overall, the nation’s wholesale goods prices fell 0.8 percent in November but are 1.4 percent higher than the same time last year.

“One of the advantages of a weak global economy is that demand growth is suppressed, which results in smaller price increases,” said Associated Builders and Contractors Chief Economist Anirban Basu. “This past month, prices actually declined, perhaps a reflection of weaker performance in certain Asian economies, as well as ongoing slowing in parts of Latin America and throughout Europe.

“Investors also may be reducing their positions in economically sensitive commodities in response to fears regarding America’s fiscal cliff,” Basu said. “If America falls off its fiscal cliff, it will slow both the U.S. and global economies, resulting in less demand for steel, petroleum and other inputs.

“Given elevated levels of geopolitical uncertainty, contractors can expect greater volatility in materials prices in 2013 compared to 2012,” said Basu. “With construction materials prices up 1 percent in the past year, it is unlikely prices will remain as sustained in 2013 given a host of political and economic considerations. Accordingly, contractors will need to be more careful in their contractual dealings next year over the concern of unexpected price hikes.”

Where Is the Construction Market Headed in 2013?

Where Is the Construction Market Headed in 2013?

Q3 update forecasts U.S. GDP growth to reach 6.1% in 2021, with investment in construction and other equipment and software spiking by 13.3%.
Equipment Leasing & Finance Foundation
July 16, 2021
Follow Us