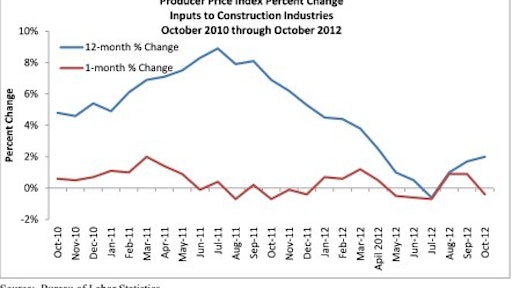 Construction materials prices saw a slight decrease of 0.4% in October 2012 after a slight increase of 0.9% in September 2012.

A number of construction materials experienced price increases in October.

Overall, the nation’s wholesale goods prices slipped 0.2 percent in October but are 2.3 percent higher than the same time last year.

“Given the continuing turmoil in the U.S. financial markets, the instability in Europe and the shaky global economy in general, commodity and construction input prices are likely to become more volatile,” said Associated Builders and Contractors Chief Economist Anirban Basu. “This does not mean commodity prices will necessarily rise every month but simply that prices are likely to jump around more than they have in recent months.

“October’s PPI report reflects the volatility likely to come,” Basu said. “Not only did construction materials prices dip 0.4 percent for the month but certain key categories experienced rather sharp declines, including iron and steel-related construction products.

“In contrast, natural gas prices rose significantly in October,” said Basu. “It is not clear what impact Hurricane Sandy may have had on this result, but it is unlikely that natural gas prices will surge higher during the months ahead given subdued forecasts for economic expansion in the United States and in much of the world.

“However, next year is shaping up to be a very challenging time given the elevated levels of policy and economic uncertainty,” said Basu. “That uncertainty probably will translate into greater financial market volatility, which in turn will impact the stability of commodity and construction materials prices as investors shift between asset categories.”